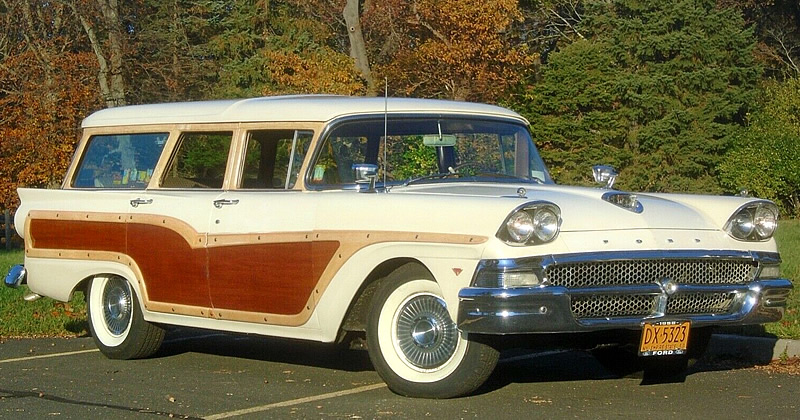 The Country Squire was the top-of-the-line station wagon for 1958 and, with their top trim level, sat parallel to the more luxurious Fairlane 500 cars.

The 58 Fords, although at first glances were quite different to the ’57 models, actually shared the same basic body. Changes included a simulated air hood scoop, honeycomb grille taken from the Thunderbird styling and the dual headlights – or rather “Safety-Twin Headlights” as Ford had dubbed them.

This particular woody wagon has done just 46,000 original miles. Even so, you can imagine it has perhaps done more than a few family vacations during its lifetime.

Under the hood sits the biggest engine that Ford had available for their passenger cars, the mighty 352 Interceptor Special that outputs 300 horsepower. This was an additional $356 with Cruise-O-Matic transmission.

At the front of the car the T-shaped grille bar was a one year only appointment.

Apart from the Thunderbird the Country Squire was the most expensive Ford for 1958. Prices began at $2,794 for the six cylinder version.

Sales for Ford during the 1958 model year were considerably down (40 percent) compared to the previous year. It’s not really surprising as there was a recession that lasted much of the ’58 model year and most of the manufacturers were suffering.

This ’58 Country Squire is currently for sale on eBay. (follow the link for even more photos)