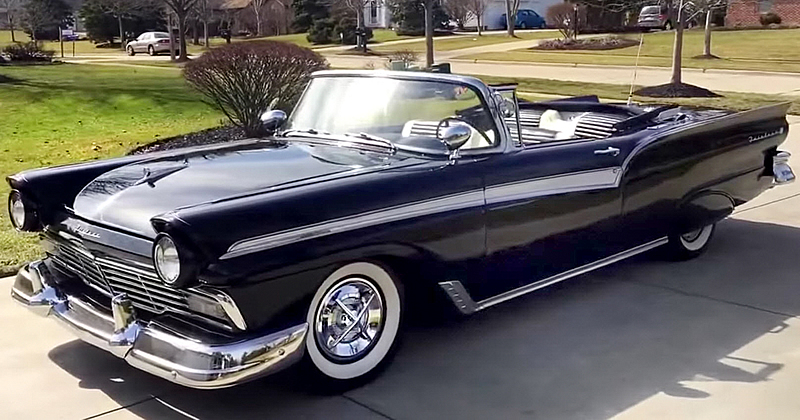 This 1957 Ford Fairlane 500 Sunliner Convertible looks cool in its Raven Black paint and two-tone black and white interior. It's powered by a Thunderbird Special 312 cubic inch (5.1L) V8. The brochure described it as "the newest and most thrilling version of America's favorite convertible!"

Fairlane models had a longer wheelbase than the more basic Custom series and the Fairlane 500 was top of the trim line for 1957 and a jump up from the basic Fairlane. Side chrome moldings were more elaborate on the Fairlane 500 extending the length of the car.

For '57, the dash now featured the new "sweep-hand" speedometer and the radio was now transistor powered!

There were 77,728 Fairlane 500 Convertibles built for the 1957 model year with a total of 637,161 Fairlane 500's built. Interestingly, Ford outsold Chevrolet this model year in total production numbers. However, for the 1957 calendar year, Chevy just beat Ford by 136 cars!

Talking of 1957 Ford's. Check out this 1957 Ford Fairlane 500 Skyliner Retractable in operation.