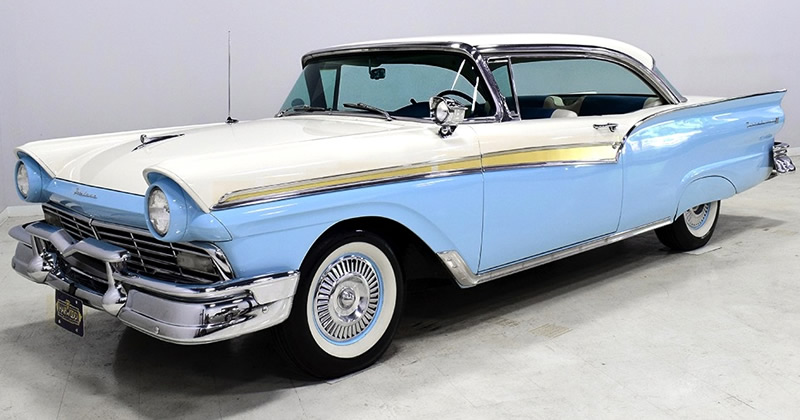 Ford managed to outsell Chevrolet during the 1957 model year. Considering the popularity and iconic status of the ’57 Chevy now, this is a surprising fact for many.

What Ford produced was a very beautiful car and the sales figures at the time proved it. The 1957 model year saw a massive 1,655,068 vehicles leave the factory gates.

Fairlane was Ford’s longer wheelbase car at 118 inches which was slightly longer than the previous year. It also sat around five inches lower than it had before. The Fairlane 500 was more luxurious version sitting at the top-of-the-line and wore a different side trim to the standard Fairlane. This sweep side trim featured a gold anodized insert.

Victoria was the name that Ford gave to its pillarless hardtop with the ‘Club Victoria’ being their 2-door version.

Jumping into the new craze, Ford’s now wore fins although they referred to them as “high-canted fenders”

Inside, the new instrument panel was now curved and featured recessed control knobs for passenger protection in case of an accident. It also featured a new sweep-hand speedometer.

1957 also marked the 25th anniversary of Ford’s V8 engine and saw the arrival of even more powerful engines. The base V8 was now 292 cubic inches and produced 212 horsepower. It was available for $100 over the price of the base 223 cubic inch, six cylinder.

However, this Fairlane is fitted with a 312 Thunderbird Special V8 costing an additional $143.

In addition, rather than the standard 3-speed manual transmission, the original owner of this car opted for a Ford-O-Matic drive automatic costing a further $180.

This ’57 Ford Fairlane Victoria is currently for sale on eBay. (follow the link for even more photos)