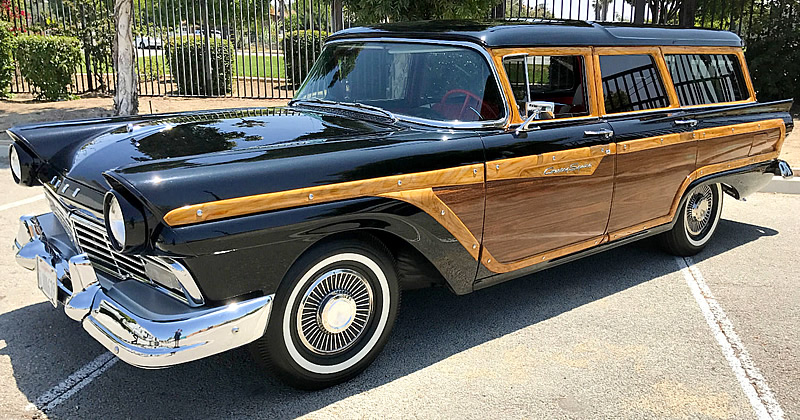 The Country Squire “Woody” was Ford’s top-priced station wagon for 1957 offering a plusher trim and appointments equivalent to that of the Fairlane 500 (station wagons sat in their own series).

All Fords were completely redesigned for 1957. The were lower, more sleek looking and were about 5 inches lower than their predecessors. The whole front slanted forward, there was a new grille and the hood was hinged at the front.

At the rear, the full-size cars were still emulating the Thunderbird fins. The taillights followed the familiar round Ford styling but was larger and had a pointed cone shape in the center. Tailgates were revised for ’57 and now had a single release handle offering much easier operation.

The deck of the station wagons was 106.5 inches long. Plenty of room to haul stuff or even sleep in the back with the rear doors still closed.

Inside, the Country Squire benefited from an all-vinyl interior. It was a fresh, new look too. The dash was a one-piece unit that had curved ends that led onto the door trim. The recessed control knobs were intended to offer more protection in the event of a crash.

The radio you see here was an option at the time costing an additional $100. This car is also fitted with MagiAire heater and defroster which was also an option and would have cost the original owner $85.

Under the hood is a 292 cubic inch Y-block Thunderbird engine that outputs 212 horsepower. This is paired with a 2-speed Ford-O-Matic Drive automatic transmission which would have cost an additional $179.80 when the car was ordered new.

Ford managed to sell 27,690 Country Squire station wagons for the 1957 model year at a base price of $2,784 which was exactly $100 more than the six cylinder version. Sales were nearly 20% up on the previous year but this wagon sold in the lowest numbers of the five station wagons Ford had available for ’57, making this quite a rare beast.