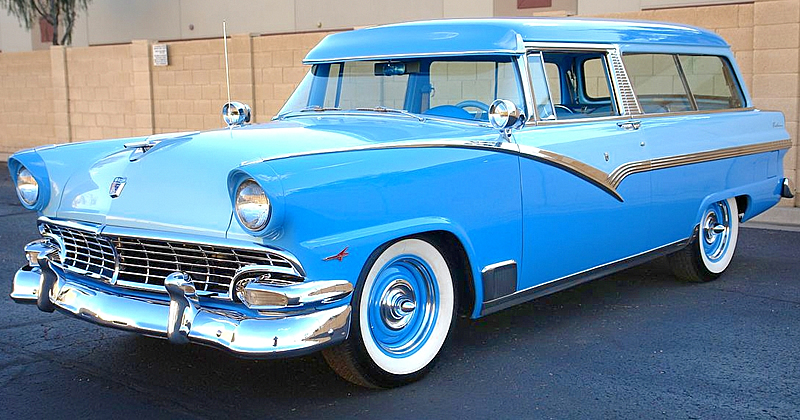 In the mid-fifties wagons finally came to life. Users wanted a practical vehicle with some glitz. This 1956 Ford Parklane Station Wagon in two-tone Bermuda Blue and Diamond Blue offered the ability to haul stuff around while looking as nice as the family car.

This two-door, six-passenger wagon was new for 1956. It was introduced fill a gap and to compete with Chevrolet’s Bel Air Nomad. What they basically did was take the base trim level Ranch Wagon and gave it Fairlane trim and added chrome to the B-pillars. Ford were proud to state in their sales literature, “You’ve never seen such luxury in a station wagon before!”

This was a family station wagon with Thunderbird styling – a hip more stylish car to haul the family around in.

Inside, while keeping in the theme of the original two-tone blue interior there are some modern touches like the custom leather bucket seats and custom sound system.

1956 also saw the introduction of 12 volt electrics allowing more accessories to be powered – something that was becoming essential for modern demands.

Power comes from a 292 cubic inch Y-block Thunderbird V8 engine producing 202 horsepower which is paired with a Ford-o-Matic automatic transmission. Opting for the V8 would have cost the original buyer an additional $100 and the Ford-O-Matic would have been $178 (3-speed manual was standard).

Some Ford options available in 1956

Ford sold 15,186 Parklane Station Wagons for the 1956 model year. The six cylinder started at $2,428 and the V8 at $2,528. Interestingly the Parklane never made it into the 1957 line-up and was a one-year only model. It was a shame as ultimately it went on to sell nearly twice as many as the Nomad.

The reality is that neither wagon sold in sufficiently high numbers as it was the 4-door models that provided far more practical application.

These are great wagons and not something you are going to see very often. It’s rare status has made it quite a collector vehicle.

This ’56 Parklane is currently for sale on eBay. (follow the link for even more photos)