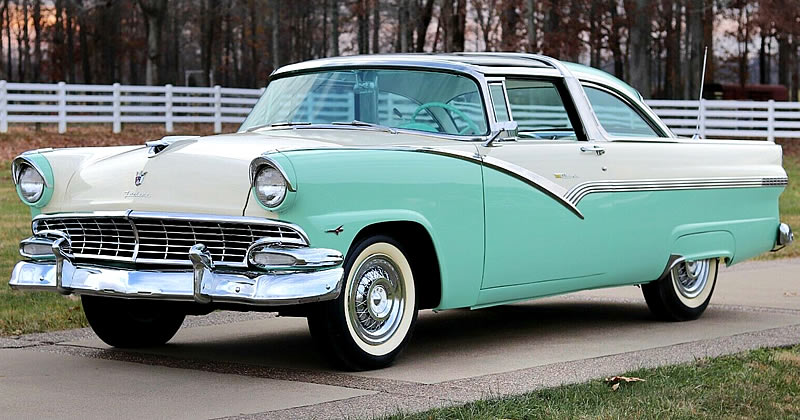 The 1956 Ford Fairlane Crown Victoria Skyliner was one of seven models in the Fairlane Series. They were the finest that Ford had to offer that year and put up against the likes of Chevrolet's Bel Air and the Plymouth Belvedere.

There were actually two versions of the Crown Victoria with the Skyliner model offering a tinted transparent "sky view" over the driver's compartment.

This distinctive car has proved popular in the collector market especially as the total number produced is quite low.

The Crown Victoria is instantly recognizable by its "crown of chrome" running up and over the center of the roof.

This band was also repeated inside of the car working its way down the pillars, across the upper part of the side panels and carried on over the top of the back seat. The center armrest was another feature of the Crown Victoria. Back seats with chrome trim running across the top

While Ford continued to use the same bodies from the previous year there were several external changes. The front grille, while retaining its concave look, had a different bar pattern losing the mesh look. The parking lamps were now rectangular, there was a new hood ornament and the V8 cars now sported a new 'rocket' emblem to show off the V8 status. The rear of the car saw new, larger taillights. You can see how the '56 compares in our article about the 1955 Crown Victoria.

As well as offering plenty of exterior chrome trim, the Crown Victoria also boasted the finest interior appointments. The dash had been revised for '56 and the 'Astra-Dial', the transparent cover over the speedometer that was introduced just 2 years previously, was now gone. The speedometer was now part of a five instrument cluster. Ford were keen to promote their Thunderbird styling in their full size cars, capitalizing on the popularity of their two-seater sports car.

1956 was also the year that 12 volt electrics were introduced. It was a welcome addition for both ease of starting and to power the many accessories that people were starting to expect in their cars.

Lifeguard Design was here too. Ford's new safety features that included double grip door latches to prevent the doors flying open in the event of a crash and the steering wheel now had a 'deep dish' design to protect the driver from the steering column. Most importantly, seat belts were now on offer.

Ford produced 9,209 Fairlane Crown Victorias for 1956 which is almost 24,000 cars less than the previous year. The Skyliner version sold far less with just 603 being produced!

While 1956 was a good sales year for Ford it was down on the previous year. This was a similar picture too for most of their competitors. Expecting a similarly fruitful year, production was ramped up expecting the usual rush of sales in the spring. Unfortunately those sales weren't as forthcoming as they had hoped. This lead to some heavily discounted cars so they could make way for the 1957 models.

This Crown Victoria Skyliner is currently for sale on eBay. (follow the link for even more photos﻿)

Enjoy the video Below