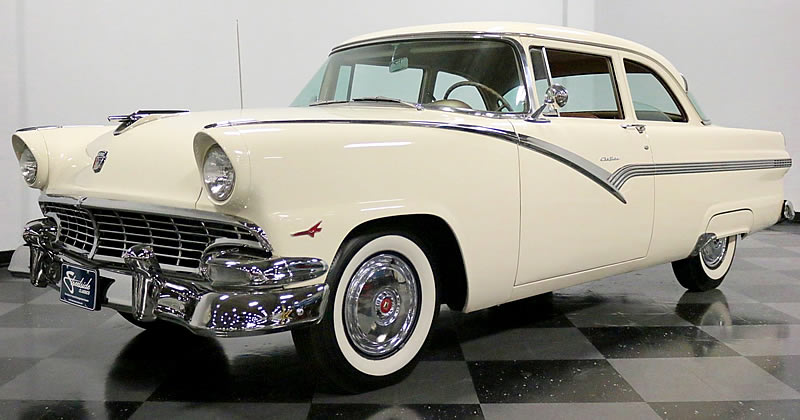 The Ford Fairlane appeared in 1955 as a replacement for the Crestline Series and sat at the top of the Ford lineup. The name came from Henry Ford’s estate “Fair Lane” in Dearborn, Michigan.

Following a major restyle for 1955, the 1956 Fords continued to use the same bodies albeit with a new grille, parking lights and side trim. What they were really pushing was their new Lifeguard Design which offered optional padded dashboard and padded sun visors, a deep dish steering wheel designed to protect the driver in the event of a crash. It was also the first year that seat belts were offered.

The Fairlane Series consisted of seven models including this Club Sedan.

Inside, Ford were proud of their luxury interiors describing them as a “living room” on wheels with rich grained vinyl and smart patterned nylons. They also featured color-keyed carpeting, harmonizing-color steering wheel and ultra-modern quilted-vinyl door panels.

When you paid your extra $100 for a V8 Fairlane what you got was a Thunderbird branded, 292 cubic inch power plant with a 4-barrel carburetor and a total output of 200 horsepower. Or 202 horsepower if you opted for the $178 Ford-O-Matic Drive automatic transmission that the original owner of this car opted for when they ordered it.

Other options ordered with this car and added when it was assembled in the Dearborn, MI plant include: Master-Guide power steering ($53), MagicAire heater / defroster ($85), Radio ($95), electric clock ($15) and fender skirts.

Had you have ordered a back then it would have cost you $2,047 for the base six cylinder. Ford produced 142,629 of them for the ’56 model year making it the 2rd most popular of the Fairlane Series.

This ’56 Ford Fairlane is currently for sale on eBay. (follow the link for even more photos)