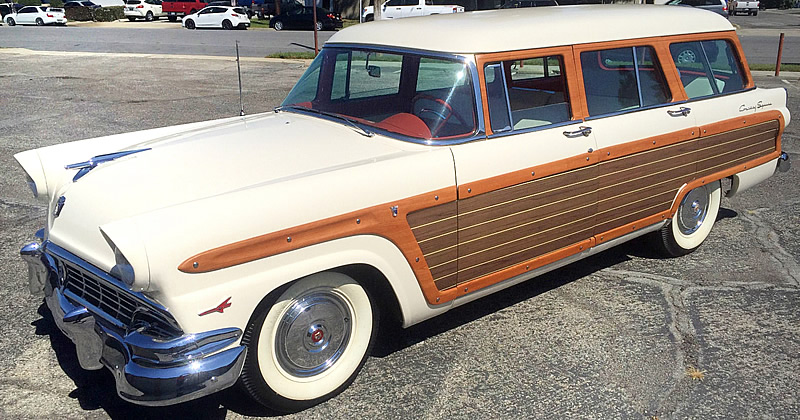 There is something very appealing about station wagons from the fifties. For many they bring back memories of family vacations or just traveling to the store with Mom. Add to that the visual appeal and indiviuality of a woody and you have a great car to have a lot fun in. This 1956 Ford Country Squire in Colonial White is no exception.

Not much had changed with Ford cars between 1955 and 1956. They used the same bodies with just a few changes to the external appearance. There was a new grille that was characterized with small rectangles instead of small squares from the previous year. Parking lights had changed from round to rectangular too.

Wood paneled station wagons were still relatively popular in 1956 although they had been using simulated wood for a few years now. This Ford used Mahogany-finished steel panels framed with wood-grained, glass-fibre moldings.

With a storage deck of 9 feet by 5 feet (with tailgate down) there was plenty of room to haul stuff. “Quick-change” luxury lounge interiors were also the order of the day with an extra row of removable seats this station wagon could carry eight people comfortably.

Inside there is a two-tone interior. Seating was available in woven plastic and vinyl in a choice of three colors: green, blue and red. Two all-vinyl interiors were also available: Western Brown and red / white.

Under the hood the V8 equipped cars came with a 292 cubic inch engine that output 200 with the standard 3-speed manual transmission. Ford-O-Matic Drive automatic drive cars like this one output a little extra and were rated at 202 horsepower.