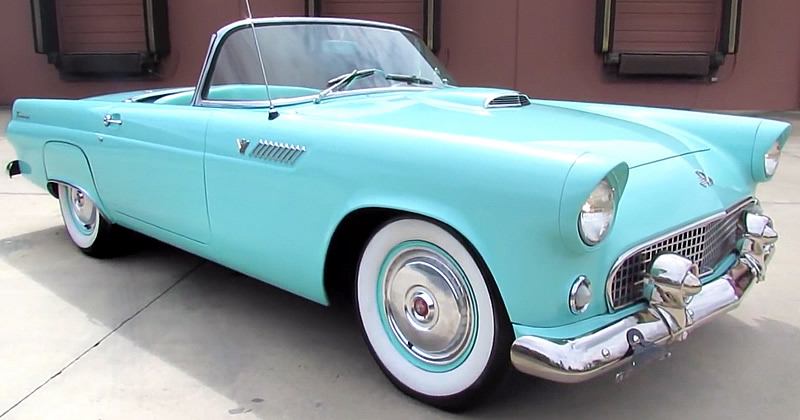 The beautiful 1955 Ford Thunderbird we see here is equipped with a 292 cubic inch V8 connected to a Ford-O-Matic automatic transmission. It is painted in Thunderbird Blue with Turquoise / White vinyl (XC code) interior.

Ford hadn't produced a two-seater since 1938 but they needed something in response to the Corvette that launched in 1953.

Unlike the Corvette the Thunderbird was all-steel construction - although the optional removable hardtop was made from fiberglass. Ford called the Thunderbird 'A personal car of distinction' and was never really intended to be a sports car.

The T-Bird was an instant hit and the attraction to it was nothing short of extraordinary. 3,500 cars were ordered in the first 10 days. That popularity has never really waned. The first generation T-Birds lasted from 1955 to 1957 and was the only time they were a two-seater. 1958 saw a re-style and they became 4-seater transportation.

Ford produced 16,155 Thunderbirds for 1955, that's over TWENTY THREE TIMES MORE than with the Chevy Corvette of the same year that only managed 700 units. Base price for the Thunderbird was $2,944. Only three colors were available this first year; Raven Black, Thunderbird Blue and Torch Red.

This car has some great power options all adding to the cost price when bought new. Power-Lift windows ($102), Swift Sure power brakes ($32), Master-Guide power steering ($91), 4-way power seat ($64). The Ford-O-Matic automatic transmission would have cost an additional $178. An AM radio was a $99 luxury as was heating which would cost you $71.