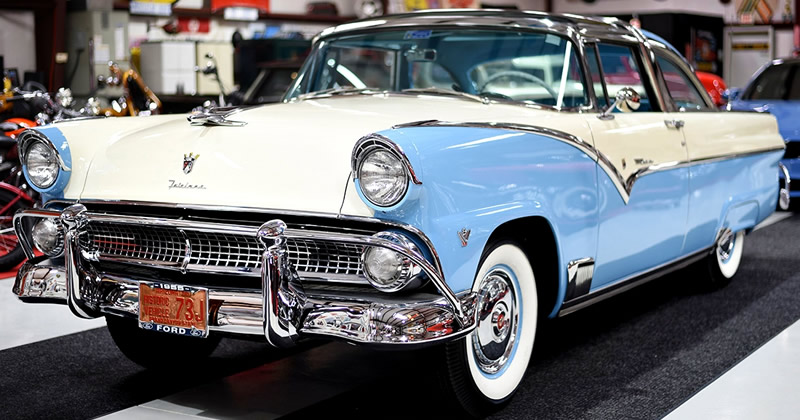 This 1955 Ford Crown Victoria in Regatta Blue and Snowshoe White is a classic fifties color combination. Ford totally redesigned their cars for ’55 and they were really starting to show the beautiful styling that the late fifties was famous for.

What’s more this is the even rarer plexiglass topped ‘Skyliner’ model.

The Fairlane has a distinctive V-shaped side trim that ran the length of the car and is used to divide the two-tone color schemes.

Wraparound windshields were new for ’55 too.

It has a 115.5″ wheelbase and the overall length is 198.5″ excluding the continental kit which is an aftermarket item.

This beautiful and rare Skyliner was an Arizona car and has been the subject of a thorough restoration.

While there were 33,165 standard Crown Victoria cars produced by Ford for 1955 there were only 1,999 plexiglass Skyliners made that year. They had a base price of $2,272.

This car was originally assembled in the Somerville, MA assembly plant. Options installed with the car included the 272 V8 engine, Ford-O-Matic Drive automatic transmission, AM radio and fender skirts.

This ’55 Crown Victoria Skyliner is currently for sale on eBay. (follow the link for even more photos)