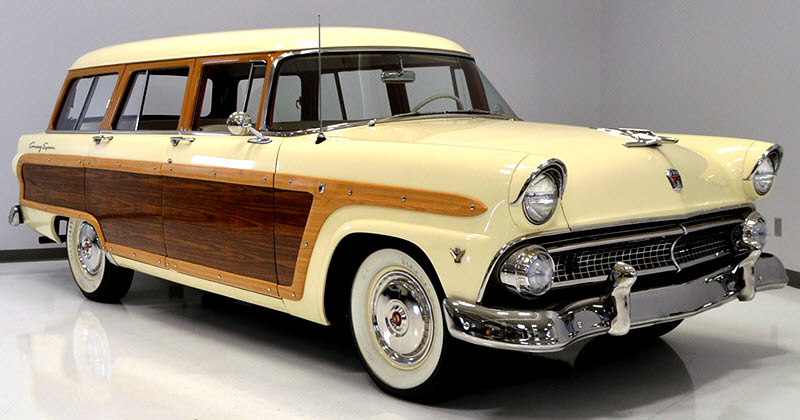 Station wagons can invoke strong memories of a time gone by, when you would vacation with the family on an exciting road trip.

This 1955 Ford Country Squire station wagon is no exception. She captures the period perfectly with the Colonial White exterior contrasting well with the woodgrain side panels.

The bright red and white interior really does scream 1950s and all that was so much fun about that era. Red and white interior and dash

There was now a revised dash design, only the speedometer was carried over from 1954.

Note the third row of seats in the Country Squire. This is an 8 passenger car with access via the second row of seats that fold down (much like the front seats do in a coupe). It's nice that this car still has them as these removable seats were often taken out to provide more cargo space. Ford gave their cars a complete redesign for 1955, inside and out. The cars were longer, wider and sat lower. Parking lights were positioned at either end of the new, concave grille and sat under the headlights. This was an exciting year for Ford - the year they launched the Thunderbird. 1955 was the first year that station wagons were their own model range. At the top of the trim tree for sat the Country Squire - equivalent to the Fairlane that headed the coupes, sedans and convertibles. It was fitted with glass-fiber, maple grained body and tail gate moldings.

Ford produced 19,011 Country Squire Station Wagons for 1955 with a base price of $2,492. This car is also fitted with Ford-O-Matic automatic transmission ($178), power steering ($91) and heater ($71) - all options at the time of purchase. This particularly car was made in Dearborn, Michigan but spent most of its life in California.

1955 was a great year for Ford, their biggest production year since 1923 when the Model T was out.