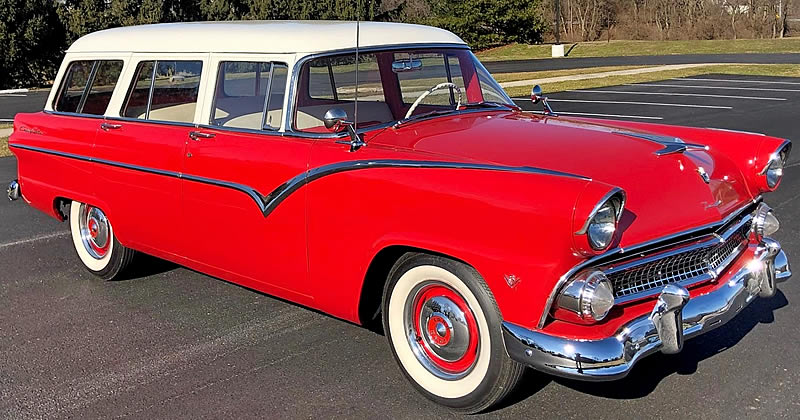 Previously only available as an 8-passenger version, Ford introduced this 6-passenger Country Sedan for 1955.

Just like Chevrolet, Ford had totally redesigned their cars for the 1955 model year. These longer, lower and wider cars certainly appealed to the public and resulted in nearly a 25% increase in sales from the previous year.

While the five different station wagons were technically their own series, the Country Sedan was an intermediate level trim on the same level as the Customline series.

Inside, it was all-new for 1955 with the exception of the transparent top “Astro-Dial” speedometer which was carried over from 1954.

There is ample room in the cargo area with even more available with the rear seats folded down. These station wagons are generally worked hard which means areas such as this can prove tricky to restore due to wear and tear over the years. A fine job has been done of this particular wagon.

Under the hood sits the new for 1955, Y-block 272 cubic inch V8 that outputs 162 horsepower. It cost an additional $100 over the price of the standard 6-cylinder. This is paired with a 3-speed manual transmission.

Prices started at $2,156 for equipped with a 6-cylinder engine. The extra row of seats basically cost an extra $131 on that price.

This ’55 Country Sedan is currently for sale on eBay. (follow the link for even more photos)