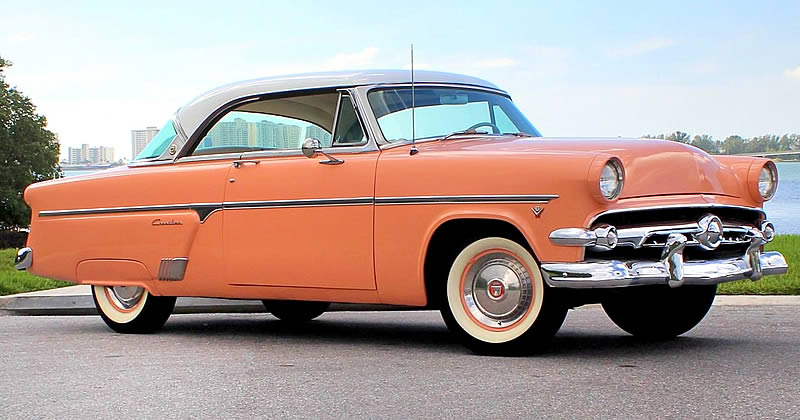 Crestline led the way and was top-of-the-line with five smart body styles. The Fordor Sedan, Country Squire Station Wagon, Sunliner Convertible, the Skyliner (with transparent roof) and the Victoria 2-door hardtop that you see here.

External changes for 1954 included a new grille with central spinner and round parking lamps replacing the rectangular ones.  At the rear there were slightly larger taillights.

Inside there had been a restyle with a new Astra-Dial Control Panel and speedometer with a transparent lid that allowed more light in during the daytime to illuminate it. The block pattern door panels were also new and unique to the Crestline. Under the hood of this Crestline Victoria there's a, "new for 1954" 239 cubic inch "Y" block V8 engine replacing the older flatheads. Despite the same displacement figure, horsepower was up outputting 130 horsepower which was up 20 hp from the year before. It is paired with a Ford-O-Matic automatic transmission.  The latter costing an additional $260 of the base price of the V8 cars.

Note the plastic bag reservoir under the hood for the windshield cleaning fluid - Ford were the first to do this, replacing the easy to break glass containers that had been used previously.

The Crestline would have been up against cars like Chevrolet's Bel Air and Plymouth's Belvedere for sales. Although Chevrolet sales were better, Ford's Crestline beat the Belvedere by a wide margin.

This 1954 Crestline is currently for sale on eBay. (follow the link for even more photos﻿)