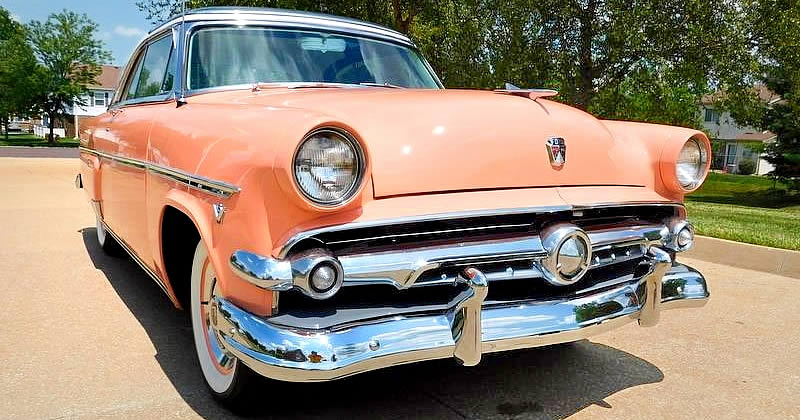 This 1954 Skyliner is part of the Crestline Series that was top of the Ford line-up from 1952 to 1954. It was brand new that year and the transparent top (made from acrylic glass) caused quite a stir when it was released.

Sitting just above the front seats it gave the feel of a convertible with the top down while being fully protected from the elements. Roll down the windows and you really had that open feeling.

Paintwork is the original color of Sandstone White over Cameo Coral body. A typical fifties pastel shade. The 44,558 miles displayed on the odometer are believed to be original.

The all-vinyl interior matches the exterior and complements it perfectly.

The speedometer mounted on the Astra-Dial Control Panel has a transparent hood that let in daylight to make the numbers easier to read. Never particularly well received these were dropped by Ford for the 1956 model year. Mercury had their own version. The Monterey Sun Valley.

When the Fairlane took over as the top trim level for Ford in 1955, the Skyliner moved over to it and became the Fairlane Crown Victoria Skyliner for both the 1955 and 1956 model years. Complaints of heat build up probably kept sales numbers down despite a easy-sliding roof curtain put in place for really hot days. The Skyliner name was kept alive from 1957 to 1959 when it was used for the similarly ill-fated but wonderful, hardtop retractable.

Ford produced 13,144 Crestline Skyliner Hardtops for the 1954 model year. The base price was $2,164 for the six cylinder version with an additional $76 if you wanted the V8. The Ford-O-Matic on this car would have cost the original owner a further $184. Other original options include; Master-Guide power steering ($134), power windows, factory radio ($88) and clock ($15).

This Ford Skyliner is currently for sale on eBay. (follow the link for even more photos﻿)