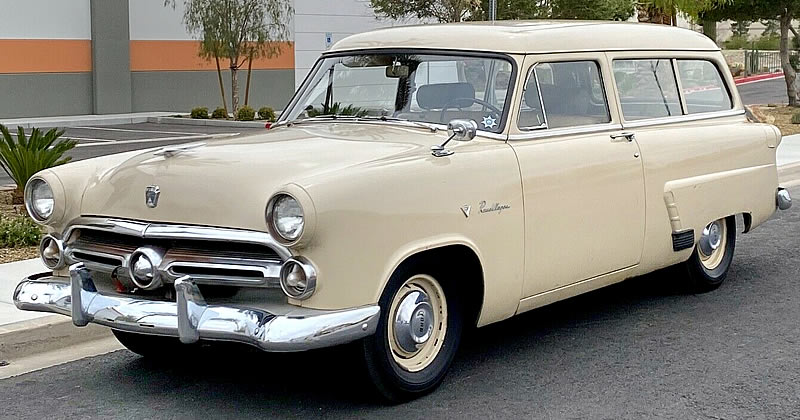 Not only did Ford’s get a complete restyle for 1952 but there was a brand new station wagon – the Ranch Wagon.

Part of this new image meant new series names. Gone were the Deluxe and Custom Deluxe names with the introduction of the Mainline, Customline and Crestline. It was also the first year for Ford using one-piece curved windshields.

The Ranch Wagon was one of four models in the Mainline series. It was a base trim workhorse model and, as such, there aren’t very many left as they tended to have a very hard working life.

This particular wagon has done just 46,000 original miles and a true survivor car having had just one repaint since it was built in Long Beach, California all those years ago.

Inside, the dashboard for ’52 had a new integrated Flight Style instrument panel that was somewhat similar to what Cadillac had done in 1948. The seat covers of the Ranch Wagon were two-tone vinyl as standard. These ones are in remarkable condition considering their age.

Under the hood, Mainline cars came with a 215 cubic inch six-cylinder, 101 horsepower engine as standard. The Ranch Wagon was ordered new with the 239 ‘Strato-Star’ Flathead V8 that outputs 110 horsepower. It’s paired with a Ford-O-Matic automatic transmission – a combination that would have cost an additional $259 when the car was ordered.

During its first year, the Ranch Wagon sales totalled 32,566 at a base price of $1,832. It had become the best seller of the three wagons Ford now had available.

1952 was actually a relatively low production year due to a 10-month production year with late introduction of new models. There were also raw material shortages due to the Korean war and also a steel strike making the ’52 cars all the more rare and collectable.

This ’52 Ranch Wagon is currently for sale on eBay. (follow the link for even more photos)