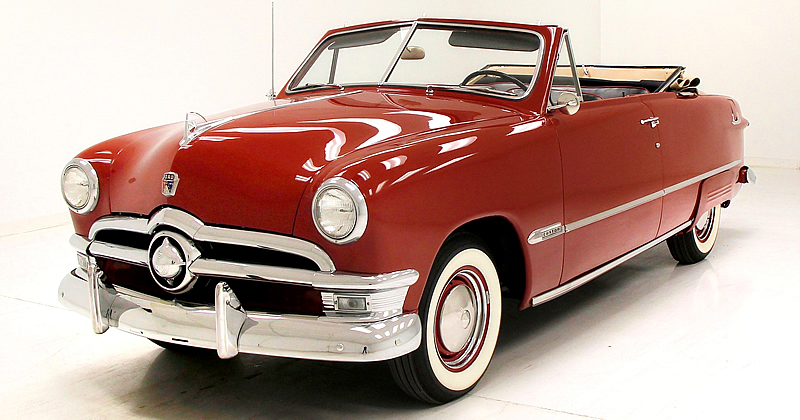 This 1950 Ford Custom Deluxe Convertible is a very nice example in Matador Red. It was fully restored in 2017 by the second owner.

The original owner was a school principal and, despite the full restoration, this Ford still has the high school parking pass in the window to commemorate him. A nice touch that keeps an important part of the car’s history alive.

The 1950 models were visually very similar to the best-selling 1949 models that had caused a sensation when they were launched. While offering just minor refinements and trim changes, Ford had produced a much improved car. Gone were the problems with water and dust coming through the cracks in the body and the steering was much improved. Also now present were push-button door handles.

The new for ’50, “non-sag” spring equipped seating enjoyed leather covering in the convertible – other models used Mohair or Broadcloth.

Under the hood sits the original 239 Flathead V8 which is paired with a 3-speed manual transmission.

This Ford Custom is currently for sale on eBay. (follow the link for even more photos)