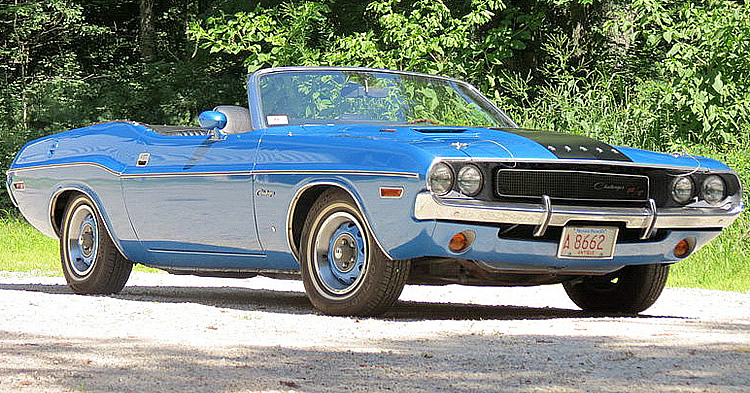 This 1971 Dodge Challenger Convertible in Bright Blue Metallic is not only in great condition but also has some rare options. What’s interesting is that front grille looks like a 1970 although the VIN etc would place it as a 1971. The rear of the car also looks correct for a 1971.

Challenger was only offered as a convertible for the 1970 and 1971 model years. A convertible R/T was only available for 1970.

A 1971 Challenger Convertible was used as the pace car for the 55th Indianapolis 500.

The simulated woodgrain on the Challenger’s dash and center console was also found in the door panels. All-vinyl bucket seats with integral head restraints were standard. The convertible is also equipped with front courtesy lights. The original purchaser of this car went for the biggest available engine for this car – a 383 cubic inch Magnum V8 with 4-barrel carburetor and paired up with a TorqueFlite automatic transmission. This produced 300 horsepower which was 25 more hp than the 2-barrel carburetor version.

The engine would have cost another $145 on top of the standard V8 price with the Torqueflite costing an additional $208 over the standard 3-speed manual.

This was also to be the last Dodge convertible available until the early eighties.

As well as the engine and transmission options mentioned above, the original buyer also opted air conditioning ($380), power brakes ($45), rare powered windows and an AM Radio ($59) among a few other options.

There were only 126 cars made that were convertibles, had the 383 V8 with 4-barrel and had an automatic transmission. Add in the fact this car has the rare power assisted windows option, you have a very desirable car here.

This Challenger is currently for sale on eBay. (follow the link for even more photos﻿)