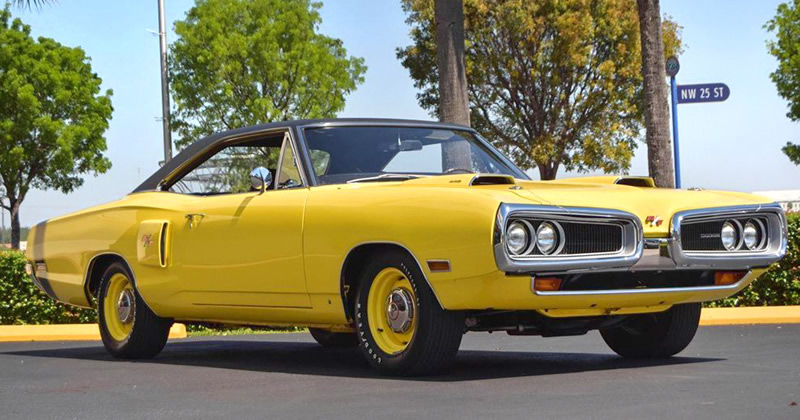 If you want power and to make a statement, you can't go far wrong with this 1970 Dodge Coronet R/T 2 door hardtop painted in Banana (FY1 code) with black vinyl interior.

Once more using the B-body, the Coronet had a refresh for 1970. For a "low-price" car the Coronet looked amazing. A new, distinctive split grille / bumper combination was used where the bumper molding surrounds each grille.

The Coronet 500 was the top trim level for Coronet with the R/T the high-performance version. This was the last year in the short life of the Coronet R/T having only been around since 1967.

R/T badges appeared between the grilles, on the simulated scoops on the hood and rear panels. It also appeared under the DODGE name in the middle of the rear escutcheon panel (which was also blacked out on the R/T models). Bumblebee stripes were placed across the trunk lid and down the side of the rear fenders.

1970 saw new, delta-shaped taillights with three sections each side.

Power comes from a 440 cubic inch Magnum V8 "RB" (High Performance) engine with 4-barrel carburetor providing 375 horsepower. Fitted here is also the optional Ramcharger meaning that the scoops on the hood that were normally simulated were now fully functional. TorqueFlite automatic transmission was standard for the Coronet although a 4-speed manual transmission with Hurst shifter was a no-cost option and appears on this car.

The original Coronet sales brochure stated, "Open the door and say 'ahhh'..." proudly describing how nice their seats were for car designed to save you money.

SOME AVAILABLE CORONET OPTIONS IN 1970