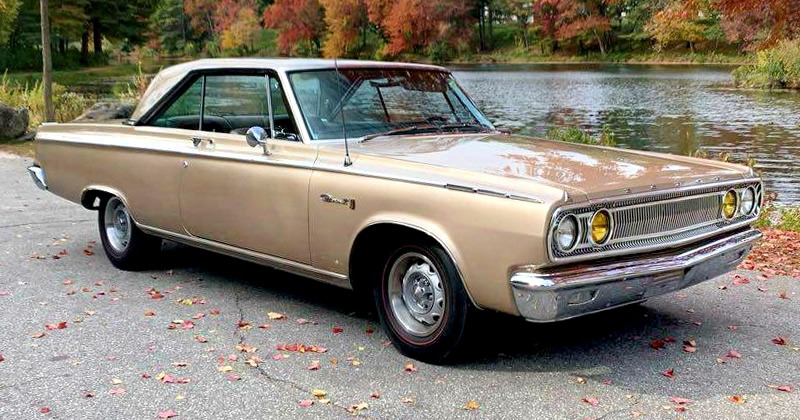 Built on a 117″ wheelbase, the intermediate-sized Coronet was the ‘Hot New Dodge’  for 1965. The name was actually revived, with the public last seeing a new Coronet back in 1959.

This 1965 Dodge Coronet 500 was actually the top trim series available. There was also the base Coronet that had rubber floor mats instead of carpeting and the Coronet 440 that did enjoy full carpeting and extra brightwork around the car.

The Coronet 500 enjoys, in addition all-vinyl bucket seats at the front, center floor console (with storage), deluxe arm rests, padded dashboard, deluxe spinner and came with a more powerful standard engine (a 273 V8 producing 180 horsepower rather than the standard 145hp, 225 six cylinder). This car however is equipped with something more powerful – read on…

The Coronet came with a combination of cloth and vinyl interiors except the 500 which came with all-vinyl.

Note: The steering wheel on this car is not standard but the original has been kept with the car.

Power on this particular Coronet comes from a 318 cubic inch V8 producing 230 horsepower. This is paired with a TorqueFlite automatic transmission. The engine would have cost just $25 more than the standard 273 V8 that came as standard with the 500. The TorqueFlite however would have come in at an additional $181 when the car was originally ordered.

There were approximately 33,300 Dodge Coronet 500s made during the 1965 model year. However, there is no breakdown available between the two-door hardtop and the convertible. The Hardtop factory price started at $2,637.

This ’65 Coronet 500 is currently for sale on eBay. (follow the link for even more photos)