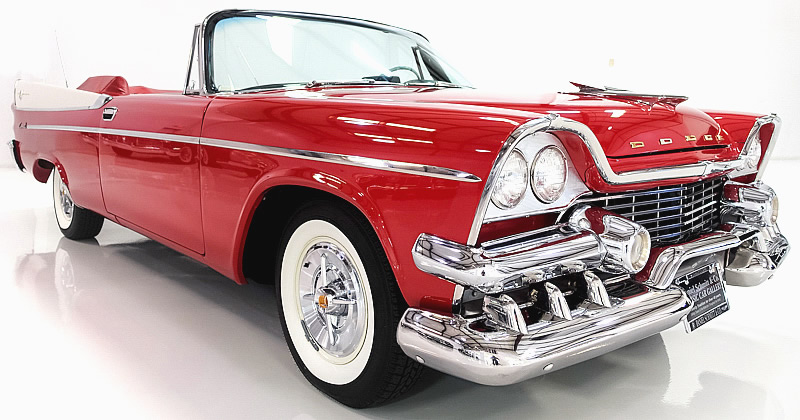 This 1958 Dodge Coronet Lancer Convertible was the subject of a thorough restoration back in 2007 and it still looks incredibly sharp in its Eggshell over Crimson paint. It's a particularly rare car as it was ordered with the new for '58, Super D-500 engine.

Still using the 1957 body shells the big change for the 1958 Dodges was the new grille and bumper assembly and dual headlights. These changes however weren't enough to keep sales high and total production was down over 50% on the previous year. This was, no doubt, not helped by the 1958 recession.

The rear is unmistakably Dodge and where these 1957-59 cars really come alive. Huge tailfins and turret style taillights are arguably the ultimate in Jet-Age styling. It's hard to believe when you look at this stunning convertible that the Coronet was actually the base trim level. What potential buyers did find though is luxuries like a full carpet would cost another $15 but were standard on the other Series'.

The convertible interiors really look the part while being hard wearing and could be wiped clean in a jiffy - at least that's what the original sales literature told us. The instrument panel is a slick affair with a Scope-Sight Speedometer that indicates the speed with a red bar.

Under the hood is the mighty Super D-500, a 361 cubic inch V8 that has dual 4-barrel carburetors and produces 325 horsepower - a very powerful engine for 1958. They only came paired with a TorqueFlite automatic transmission and increased the price by another $492. When these Coronet Convertibles came out they would have cost $2,907 with the standard 325 cubic inch Red Ram V8 engine and 3-speed manual transmission.

Dodge produced approximately 77,000 Coronets for the 1958 model year. Of the five models in the series only a small proportion where likely to be convertibles. However, what really makes this an extremely rare car is the Super D-500 engine mentioned above. Only eleven of these cars are known to exist.

This Dodge Coronet is currently for﻿ sale on eBay. (follow the link for even more photos﻿)