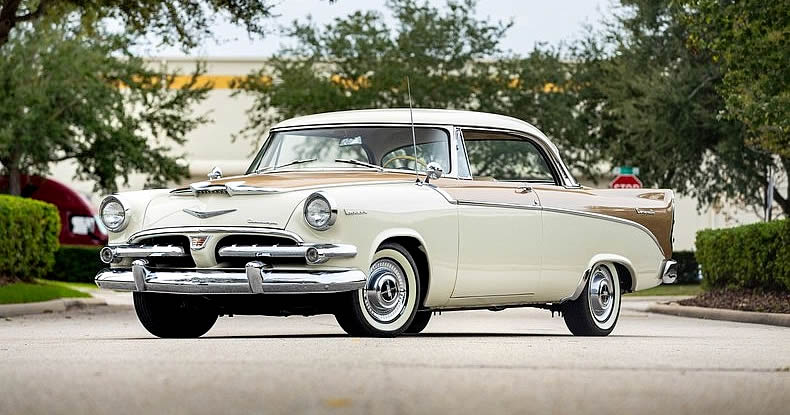 The Forward Look had arrived and was leading cars into the fins and chrome era of the fifties. This 1956 Dodge Coronet Lancer 2-door hardtop shows us how cars were becoming far more exciting. People wanted more color and flash and they certainly got it with this Gold and White beauty.

Now it it's second year, the Forward Look was proving popular and styling changes were minimal for 1956 although big changes were planned for the 1957 model year.

Lancer was the name Dodge gave to identify their pillarless hardtop models from 1955 to 1959.

Although the Coronet was the base trim level for 1956, it certainly didn't look like it was lacking anything. One particularly stand-out styling change was the addition of tail fins and revised taillights  for 1956.

This stunning car has just 49,000 miles on the odometer and this is believed to be original.

Power comes from a 315 cubic inch Red Ram V8 providing 218 horsepower. And, new for 1956 was Chrysler's push-button automatic transmission, replacing the dash mounted lever. Known as Dodge Magic Touch Control, it was paired with PowerFlite 2-speed automatic transmission. Advertising promoted it as the 'Magic touch of tomorrow!' The controls were mounted to the left of the left of the instruments and contained no PARK button - necessitating the use of the parking brake. Dodge produced 142,613 Coronets for the 1956 model year. This figure is across ALL of the body styles in the Coronet series as individual records were not kept. A 1956 Dodge Coronet Lancer 2 door hardtop would have cost you $2,438 if you had ordered one new.