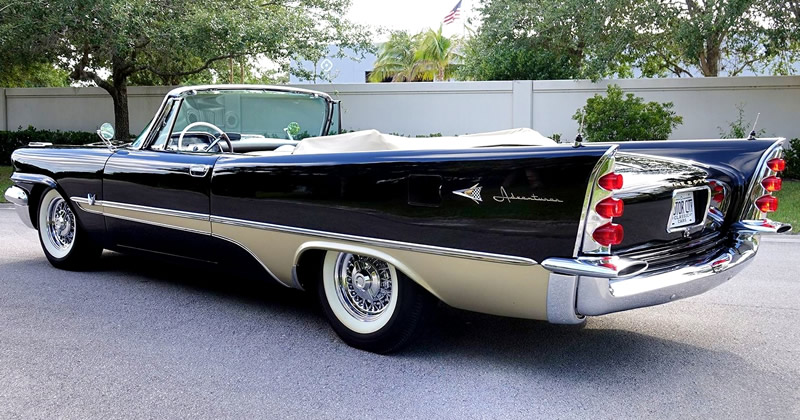 Introduced the previous model year, the Adventurer was their flagship and high-performance offering.

Note the dual headlamps! When the Adventurer was released 2 months after the other DeSoto models it was then legal in all states to use them so they were standard equipment. Many people feel that dual head lights didn’t appear until 1958.  While many cars did indeed start using them from that model year, there were also several models that either had them as an option (for states that it was legal) or switched during the 1957 model year once it was legal in all states.

At the rear, and part of Virgil Exner’s Forward Look are the swept back tail-fins and stacked tail lights. Distinct Adventure features included name plates on the rear fender and “gold turbine” wheel covers. The look of those wheel covers isn’t popular with everyone and the wheels on this car look like they have been changed.

Inside, the Adventure enjoyed an exclusive gold, white and tweed combination.

Under the hood was where the real awesomeness was. A 345 cubic inch HEMI V8 with dual 4-barrel carburetors connected to a TorqueFlite automatic transmission provided 345 horsepower. It was the first the first base production car to hit the magic, one horsepower per cubic inch threshold. This was a standard combination on the Adventurer.

You can see that this car looks amazing and has undergone and spectacular restoration. It’s an extremely rare beast and once it belonged to Richard Carpenter (of ‘The Carpenters’ in case you didn’t know). He’s a fellow car nut so you know it’s been in safe hands.

DeSoto managed to sell just 300 Adventurer Convertibles for the 1957 model year. Even the hardtop managed just 1,650 sales – This was around a 66 percent increase in sales on the previous year though (there was no convertible for 1956).

If you had ordered one back then it would have cost you around $4,272 for the convertible and $3,997 for the 2-door hardtop.

This ’57 DeSoto is currently for sale on eBay. (follow the link for even more photos)