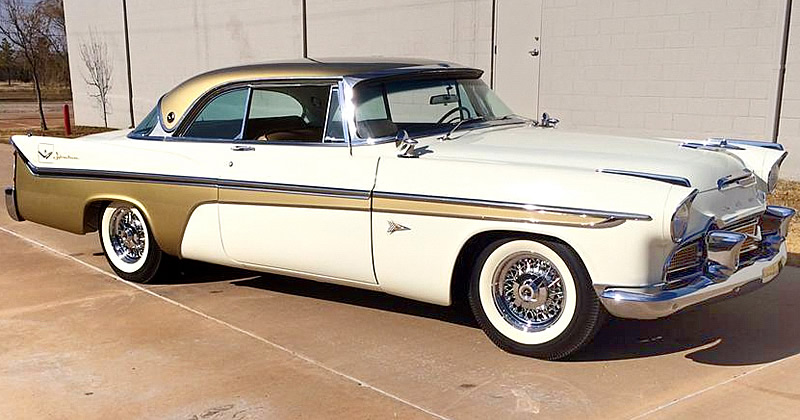 It was a high-performance model that was technically a sub-series of the Fireflite series and also occasionally referred to as a Golden Adventurer. Only available as a sporty 2-door hardtop, it was actually a lower-priced and lower-powered relative of the successful Chrysler 300.

Desoto engines were enlarged this year providing two new versions. The larger of the two was reserved for the new Adventurer. It had a high-lift camshaft, larger diameter valves and stiffer valve springs.

As the new top-of-the-line car for DeSoto, the Adventurer had a host of standard features including: powered windows, power steering, power brakes, an electric clock and an AM radio.

Inside is the color-keyed nylon and leather interior. Sitting under the dash in the center is a rare option, Highway Hi-Fi record player. It was another accessory that highlighted the change from 6 volt to 12 volt electrics that year. Under the hood is very clean and houses the original 341.4 cubic inch V8 that was standard with the Adventurer. This hemi engine has two, 4-barrel carburetors and produces 320 horsepower. Paired with a PowerFlite automatic transmission that has push-button gear selection - a brand new and exciting feature for 1956. Even the underside is remarkably clean on this Adventurer!

Costing $3,728 when it was launched it became the highest priced car in the DeSoto lineup. A total of 996 cars were produced during the 1956 model year - not bad considering its high price and launch half way through the model year.

This DeSoto is currently for sale on eBay. (follow the link for even more photos﻿)