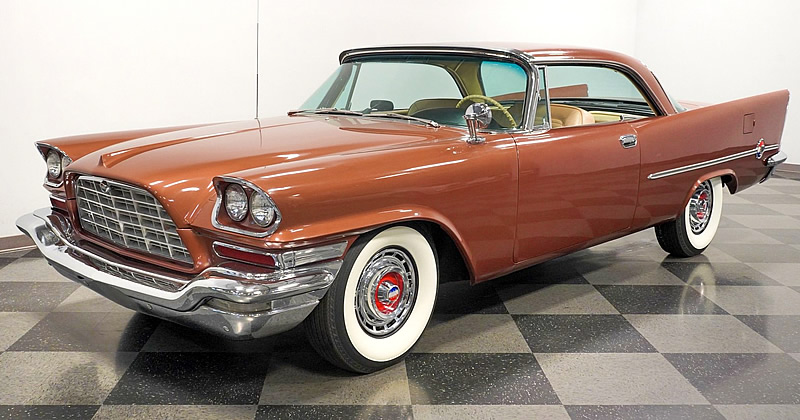 It was huge, had large fins and was the size of a family car, but the 1957 Chrysler 300C was the fastest and most powerful production car in the USA at the time.

This was the third in Chrysler flagship letter series cars and was the first time it had it’s own unique grille (often referred to as the “yawning grill”) to further separate it from other models in the line-up.

At the rear there were even bigger fins than previous years and most cars manufacturers were fast reaching the pinnacle of the finned years.

Despite the flamboyance of the massive fins there were no two-tone paint schemes available for the 300C. It was only available in five monotone colors with this particular car in Copper Brown.

While the exterior has minimal trim / badging but does feature large red, white and blue “300C” emblems on the rear fenders. Suggesting its USA origins, it is just enough to let you know this is a special, high-performance car.

Other 300 badges were found on the hood, deck lid and interior but only the ones mounted on the side spears also carried the “C” letter.

Inside, the interior looks magnificent and luxurious with its genuine cowhide leather seat cushions.

Under the hood sits the mighty 392 “Firepower” Hemi V8 that has dual quads, solid lifters and outputs 375 horsepower. It was 52 cubic inches larger and 35 hp more powerful than the previous year’s 300B.

This 300C also has factory air conditioning which was a relatively expensive option costing $495 when the car was ordered new.

While these top-of-the-line cars came with power brakes, the power steering on this 300C was still an optional extra costing $107. Also non standard were the power windows on this car which cost $125 when the car was new.

If you wanted to order a 300C during the 1957 model year prices started at $4,929 for the Sport Coupe. Chrysler managed to sell 1,918 of them which was actually a 70% increase on the previous year’s sales.

This ’57 Chrysler 300C is currently for sale on eBay. (follow the link for even more photos)