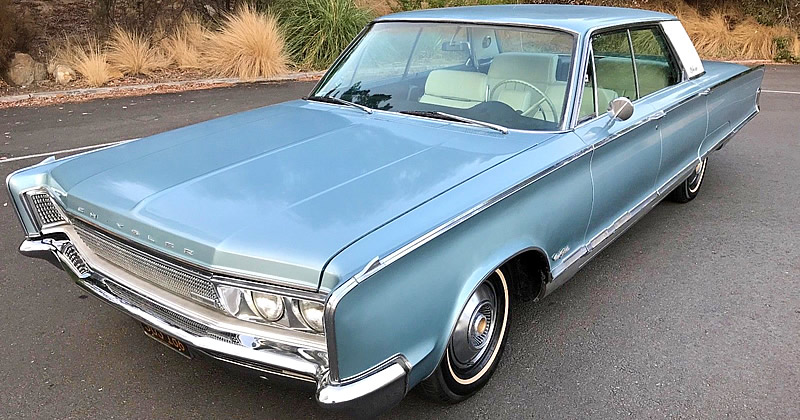 Here we have some mid-sixties luxury in the form of a 1966 Chrysler New Yorker 4-door Hardtop in Crystal Blue Metallic paint (code DD-1). Competition at the time would have been from cars such as the Buick Electra, Mercury Park Lane or the Oldsmobile 98.

1966 saw minor revisions such as a new grille and taillights. Exterior trim was added too such as the “New Yorker” script behind the front wheel housing.

Power comes from the 440 cubic inch 4BBL V8 . This car has the optional 440V8 TNT upgraded “RB” engine produced 365 horsepower (350 hp for the standard engine). It also uses twin exhausts rather than single on the standard engine.  It cost an additional $79 when ordered new.

Chrysler made 26,599 New Yorker 4-door Hardtop Coupes for the 1966 model year at a base price of $4,324. This car is also equipped with air conditioning a $510 option and was originally built in Newark, Delaware.

This New Yorker is currently for sale on eBay. (follow the link for even more photos)