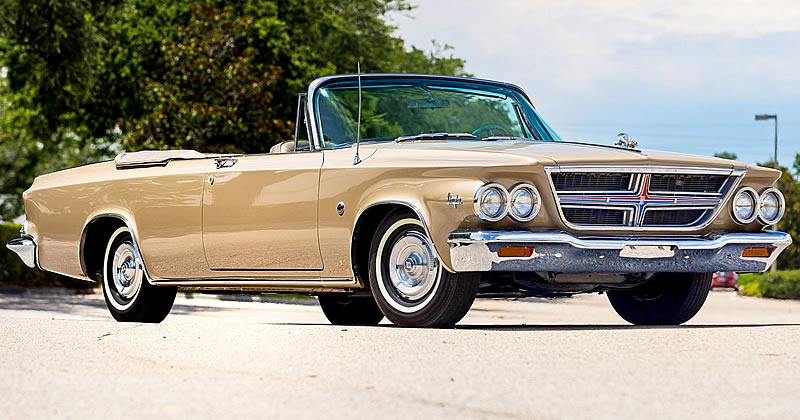 If high-performance luxury was what you wanted back in ’64 then Chrysler had a car for you! Never selling in large numbers these well-made cars made a statement whether you were just cruising in them or racing off at the lights (if you were lucky enough to be able to borrow Dad’s car).

The exclusive letter series cars were only available as a 2-door hardtop and convertible with the latter returning for 1964 after a one year hiatus during 1963.

This particular 300-K has travelled only 47,000 miles in its lifetime and is a great example of these rare cars.

Inside, the interior is all-vinyl with bucket seats and a between-the-seats console as standard. The particular low mileage car enjoys a mostly original interior.

The ‘Letter cars’ were true high-performance luxury machines. These full-size sports cars came with a 413 cubic inch V8 outputting 360 horsepower (there was also a 2 x 4-barrel carburetor version that gave another 30 hp). All were paired with a Torqueflite automatic transmission.

Air conditioning was ordered with this Chrysler – a $510 option at the time.

Convertible prices for 1964 started at $4,522 which was around $1,500 more expensive than Chevrolet’s Impala SS convertible.

Chrysler sold just 625 of their 300-K convertibles during the 1964 model year. You wouldn’t have come across many back then so the survivors will be very rare today. Estimates put the total survivors at around 140 cars. The fact that this car is equipped with air conditioning and has such low mileage, makes it very desirable and collectable.

This ’64 Chrysler 300-K is currently for sale on eBay. (follow the link for even more photos)