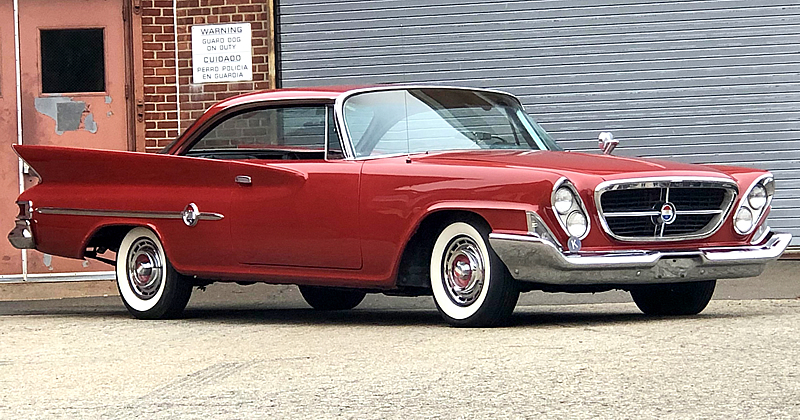 This 1961 Chrysler 300G 2-door hardtop can only be described as stunning. These cars are nothing short of beautiful with great lines and highly featured interiors.

The car was built in the Jefferson Plant, Detroit, Michigan and painted in Mardis Gras Red with black interior. It's done just 43,500 miles during its lifetime.

Chrysler made a few changes from the 1960 300F, the grille that was previously narrower at the top was now inverted and the headlamps that were side-by-side were now stacked and angled outwards at the top.

An impressive set of fins on the 300G

Although this car has an impressive set of fins it would be the last year for Virgil Exner's finned look.

Power comes from the original 413 cubic inch V8 with Ram induction which is connected to a 3-speed push-button TorqueFlite automatic transmission. Although these are beautiful luxury cars they have plenty of raw power. This engine produces 375 brake horsepower at 500 rpm. Very stylish interior with push-buttons galore on the dash - including the radio and transmission. This really is a luxury brute. There weren't that many cars this luxurious and certainly not with this sort of power under the hood. These are very impressive cars now, let alone back in 1961. They were certainly VERY FAST for their time.

This car enjoys a few optional extras purchased when the car was ordered new. Namely: power seat ($102), air conditioning ($510) and Golden Touch Tuner radio ($124). It's likely there are only about 20 cars with this configuration - This is an impressive and rare car!

This Chrysler 300G is currently for sale ﻿﻿on eBay. (follow the link for even more photos﻿)