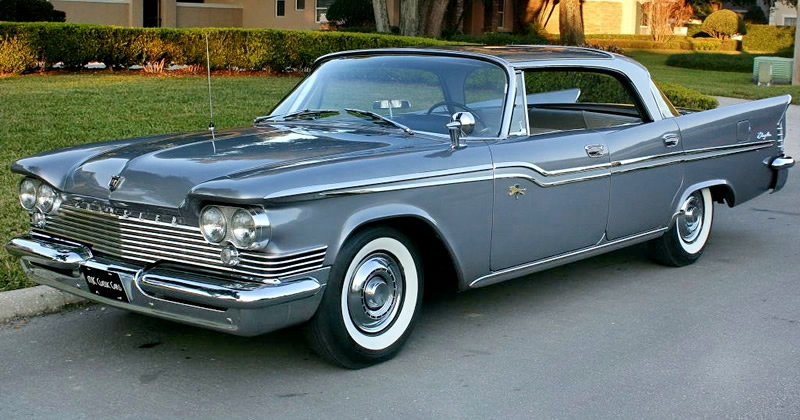 This 1959 Chrysler Windsor Hardtop Sedan is a true survivor with under 39,000 original miles on the odometer.  Even the optional two-tone paint, Spanish Silver over Winchester Grey, is in great shape and what was applied in the factory over 60 years ago!

Clearly a very well looked after car that has averaged less than 700 miles per year since it was made!

The Windsor is actually built on the Dodge chassis and has a wheelbase 4 inches smaller than the Saratoga and New Yorker.

This was to be the last year that Chrysler cars would be constructed with separate body . 1960 would see the change to unibody construction.

Notice how the roof color matches the color inside the color sweep along the side of the car.

Even the silver vinyl and black metallic threaded cloth interior is what came with the car when it rolled out of the factory when new. As are the door panels, headlining and carpet!

Look how cool the dash and instruments look. It’s had to believe the Windsor was the base model for ’59. Note the push-button gear selection on the far left and padded “safety” dash. The latter was standard on the New Yorker and Saratoga but an optional extra on the Windsor.

Power comes from the original 383 cubic inch Golden Lion V8 engine with 2-barrel Carter carburetor giving an output of 305 horsepower. This is paired with a TorqueFlite automatic transmission with push button selection (a $227 option over the standard 3-speed manual transmission).

Golden Lion was the name given to Chrysler’s new wedge-head B-block engines.  Together with the “Lion-Hearted” look, these phrases were used along with a lion image for marketing purposes in the sales literature. Accompanying the cars was a lion emblem on the seat backs, the valve covers and the front doors (both as an embossed image on the door panels and as a badge on the outside) .

Chrysler built a total of 6,084 Windsor Hardtop Sedans for the 1959 model year. The base price for this model would have started at $3,353. In addition to the optional Torque-Flite automatic transmission mentioned above, there is a Music Master push-button radio at $100, and it is also fitted with power steering and power brakes, options costing $108 and $44 respectively.