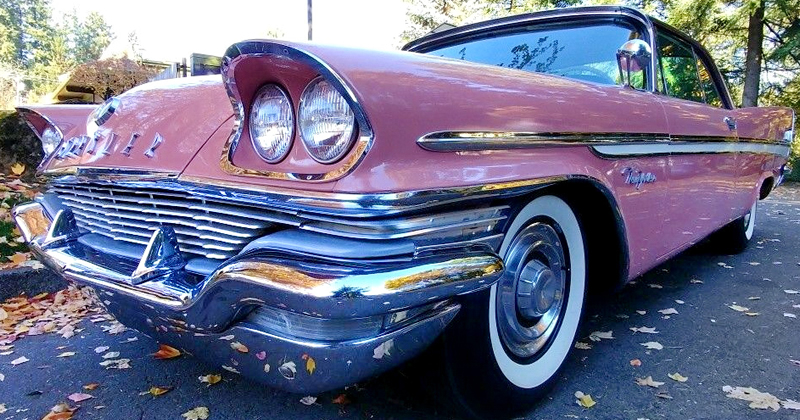 This 1957 Chrysler New Yorker is one of those gems that turns up from time-to-time with relaively low, original miles on it.

Purchased new by a judge in Pennsylvania he used it until 1960. It was then kept in a garage presumably with very little use as it resurfaced 30 years later with just 6,200 miles on the odometer.

It was then rescued, brought back to life and enjoyed enough to bring the mileage up to 48,515.

Check out those fins!

The car is still mostly original having had one repaint in its original Sunset Rose factory color (code S).

Note the dual highlights. 1957 was a transition year with many states now allowing them before being allowed nationwide the following year. This meant that cars ordered in certain states could have the dual lights as an option. About mid way through the model year the dual set-up became standard.

Inside, the New Yorker still has its original interior. Mechanically 1957 was great news for the New Yorker and the mighty 300C as they both got the new FirePower 392 cubic inch Hemi V8. The single, 4-barrel carburetor version that was installed in the new Yorker acheived 325 horsepower. The TorqueFlite push-button automatic transmission was standard on these cars. Power steering was also standard and the original owner of this car also opted for power brakes at approximately $39.

As their most expensive model for 1957 (excluding the rather special 300C), Chrysler sold just 34,620 New Yorker's across all five models in the line-up. The total sales of the 2-door hardtop you see here was 8,861 making this quite a rare car. Had you have bought one back then the price started at $4,202.

This 1957 Chrysler New Yorker is currently for sale on eBay. (follow the link for even more photos﻿)