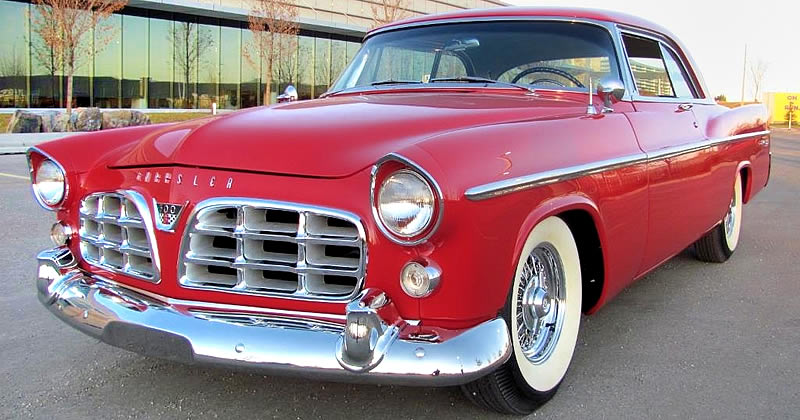 This 1956 Chrysler 300B in Regimental Red is sure to appeal if you like the combination of 'Forward Look' cars and brute power. It has been meticulously restored to a very high level using NOS, new or restored parts.

It was accurately billed at the time as, "America's most powerful car" and was the fastest production car you could buy.

Leather upholstery was standard on the 300B. 1956 saw the introduction of push-button PowerFlite automatic transmission selector (seen here on the far left of the steering wheel). Instrument panel with push-button transmission selector on the left

Chrysler introduced the 300 in February 1955 (so quite a way into the model year). It was the start of the letter series although technically it didn't really bear a letter (yet).  Successive years were given the next letter in the alphabet working through to 300L in 1965 (skipping "i").  So, the first year became retrospectively and affectionately known as the 300A.

There were few changes for the 1956 model year although it now had fins - it was the continuation of Virgil Exner's "Forward Look" vision. The lines of the 300B look clean and classy - there wasn't an abundance of trim that adorned so many cars of the era. 1956 saw the introduction of tailfins

Two high-performance engines were available on the 300B - Both were 354 cubic inch V8s. The first producing 340 horsepower. The second, slightly up-rated engine produced 355 horsepower achieving a respectable "one horsepower per cubic inch". This particular engine has been the subject of a professional rebuild.

At Daytona Speed Week a 300B set the unofficial flying mile record of 142.914 mph with an official average speed of 133.9 mph and was driven by Tim Flock. With their high-performance engines the letter cars really did rule the great horsepower race. The 300B was arguably one of the first, true muscle cars.

This car is fitted with optional PowerPilot steering with power brakes that were standard.

This 300B is currently for sale on eBay. (follow the link for even more photos﻿)