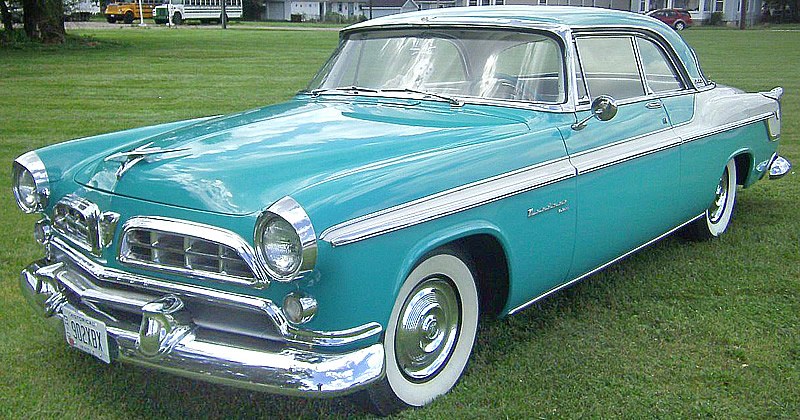 It's 1955 and the "100 Million Dollar Look", as Chrysler literature and advertising proclaimed, was now here.  Masterminded by Virgil Exner his "Forward Look" was to have a huge impact and take automobile design in a new direction for the second half of the fifties.

Chrysler cars were given a total redesign making them lower, longer and wider. Exner had tried to capture a look of motion even when they were standing still. They were an instant hit and overall sales ended up 50% higher than the year before. It has to be stated though that with plenty of fresh new designs out there it was a good year for most automobile manufacturers.

This 1955 Chrysler 2-door Newport represents one of the entry level Windsor Series but is no less striking for it. It was one of two, 2-door hardtops and fancier than the Nassau which cost over $100 less.

This particular example has done just 81,000 miles in its life and still enjoys its original interior that is in excellent condition. The Windsor Deluxe line had been upgraded and now had a V8 engine as standard - the 291 cubic inch Spitfire V8 that output 188 horsepower replacing the previous 265 cubic inch six cylinder engine. This Windsor also fitted with PowerFlite automatic transmission - a $189 option for the original owner of this car. This was controlled by a level on the dash. They weren't yet using the legendary push-button selectors as that arrived in 1956.

Also ordered when the car was new was power steering and power brakes costing $113 and $40 respectively.

This Chrysler is currently for sale on eBay. (follow the link for even more photos﻿)