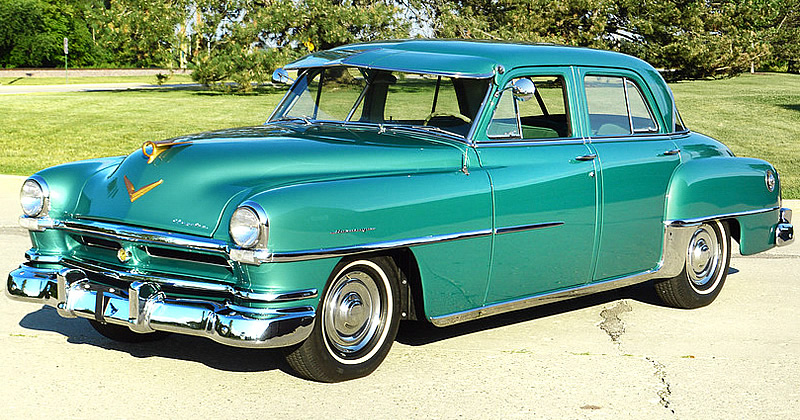 Sometimes a restoration cost will far outweigh the current value of a car. We do it because we have an attachment and end up on a mission to save a car at all costs. Other times its the desire to get every detail as perfect as possible and that costs.

This 1952 Chrysler Saratoga 4-door sedan is one such car. The mission? To make the car as perfect as possible. With a reported $75,000 spent on this car this car has become something quite special.

Having had just one owner until 2007 this Chrysler was then purchased by someone that truly fell in love with the car. Sitting with just 54,000 miles on the clock this was a car that they truly wanted to make perfect again. The restoration brief was to make her look like it was when brand new in 1952. The 1952 Saratoga was essentially the same car as in 1951 and saw very few changes from the previous year although the taillights were revised. Under that hood is a Hemi V8

Unusually the hood ornaments on this car are gold - the best guess were these were a special order by the original owner.

Inside the attention to detail continues with reupholstered seats with matched fabrics. The dash remains original which shows us how excellent this car was to begin with. The only concession to originality is the addition of seat belts. Under the hood is a 331.1 cubic inch "Firepower" V8 Hemi engine. It produced 180 horsepower and was introduced the previous year. This is paired with a Presto-Matic semi-automatic transmission. Both came as standard with the Saratoga. Here's how things started in barn find condition back in 2007, The car was all original and low mileage but the paint was looking tired and faded.

This Chrysler is currently for sale on eBay. (follow the link for even more photos﻿)

Over 200 vintage photographs help tell the story of Chrysler's Heritage. From the acquisition of Dodge and the introduction of Plymouth and DeSoto, Chrysler grew to be a mighty force in the motor industry.

Check it out on Amazon
Share2K
Tweet
Pin53
2K Shares