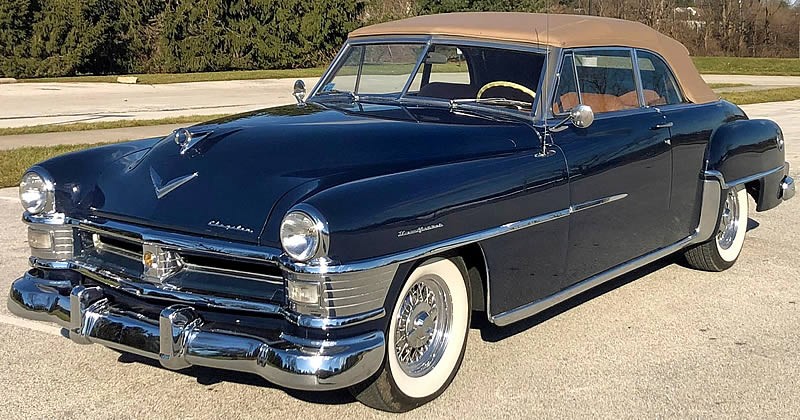 The Chrysler New Yorker sat at the top of the line for 1951 . This Ecuador Blue convertible has just 64,000 miles on the odometer.

The new 1951 models were restyled although most of the changes were to the front of the car. Most notable was the egg-crate grille that was replaced with a heavy chrome center bar look and large center piece. The bumpers, both front and rear were also heavier than the previous year.

A Chrysler New Yorker Convertible was used as a pace car for the 1951 Indianapolis 500.

The New Yorker used a longer wheelbase than the Windsor and Saratoga at 131.5 inches (6 inches longer).

Inside, the convertible enjoyed leather seats as standard.

Under the hood sits a 331 cubic inch ‘FirePower’ V8 that was all-new for the 1951 model year and outputs 180 horsepower. It was standard on the New Yorker and the first time the model had used a V8 – and it was a Hemi too!

The large ‘V’ ornaments on the hood and deck lid signifies the V8 equipped car.

If you had ordered this New Yorker convertible when it was new then prices started at $3,916. Production numbers are slightly vague as they bundle the 1951 and 1952 totals together by body style. However, it is believed around 660 of these convertibles were made.

This ’51 New Yorker is currently for sale on eBay. (follow the link for even more photos)