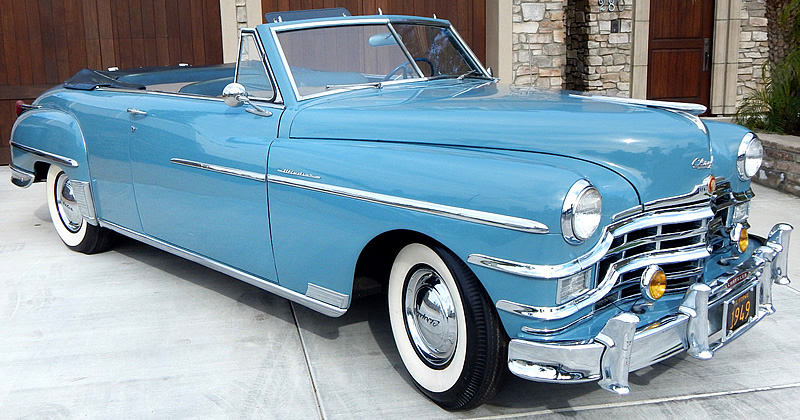 As with most automobile manufacturers after the war, it was 1949 before Chrysler gave their cars a complete revamp. It was Chrysler's 25th Anniversary and they had finally revised the dated pre-war look they had been hanging onto for so long.

Frustratingly, production got off to a bit of a late start for the Silver Anniversary models due to a strike that affected tooling.

While this 1949 Chrysler Windsor Convertible has been the subject of an older restoration it still only has just over 77,000 miles on the clock. This means that it has averaged only around 1,100 miles per year since it was new.

Windsor Series cars were the next trim level above the base Royal Series cars. Even though it was back in 1949 the convertible still came with a power top as standard.

Interiors were very classy and stylish for 1949. This car even enjoys luxuries such as a radio and heater / defroster. These would have cost the original owner an additional $90 and $70 respectively when the car was first ordered. The electric clock was standard. Cool looking dash - notice how the gauges surround the speedometer?

All Windsor cars were powered by a inline six-cylinder, 250.6 cubic inch Spitfire engine outputting 116 horsepower. This is paired with a 3-speed manual transmission.

Over 200 vintage photographs help tell the story of Chrysler's Heritage. From the acquisition of Dodge and the introduction of Plymouth and DeSoto, Chrysler grew to be a mighty force in the motor industry.

Check it out on Amazon
Share4K
Tweet
Pin36
4K Shares