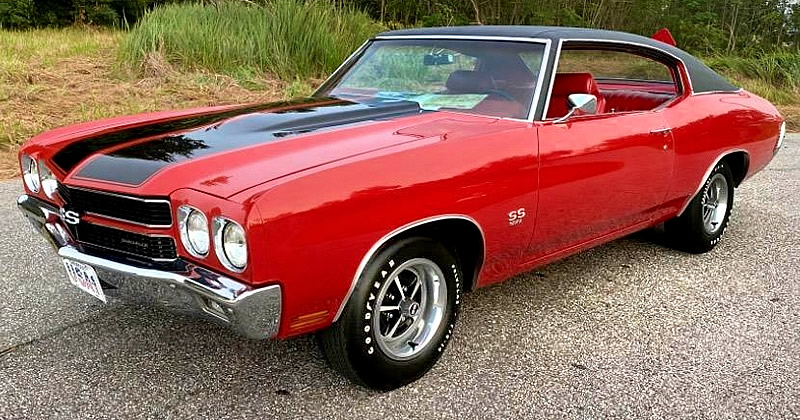 This Cranberry Red (code 75), numbers matching, 1970 Chevy Chevelle SS 396 was the subject of a thorough restoration.

The Chevelle SS396 is highly collectable and was the best selling muscle car of the 1970 model year.

Inside, the ‘newly designed interior for 1970’ enjoys Strato-bucket seats (an option even on the SS), center console and SS badging on the doors and steering wheel.

The Medium Red you see here was one of six colors available for bucket seat interiors.

Just like 1969, the SS package was just an equipment package that could be added to either the Chevelle Malibu 2-door coupe, convertible or El Camino.

The option came two different engine sizes one was the RPO Z15 which offered two versions of the 454; the LS5 outputting 360 horsepower and the mighty LS6 that outputs 450 horsepower. The other option, that you see here was the RPO Z25 that came with an L34 396 V8 Turbo-Jet that produces 350 horsepower.

Interestingly enough, these engines were now being bored out by Chevrolet to 402 cubic inches despite the air cleaner decals and other badging displaying “396”. It would have been counterproductive for them to change the name as “SS396” was too well known by then

During the 1970 model year a Chevelle Malibu 2-door hardtop would have started at $2,719 equipped with the standard 250 cubic inch six cylinder engine. The SS package with 396 engine would have brought the price up to $3,439.

This ’70 Chevy Chevelle SS396 is currently for sale on eBay. (follow the link for even more photos)