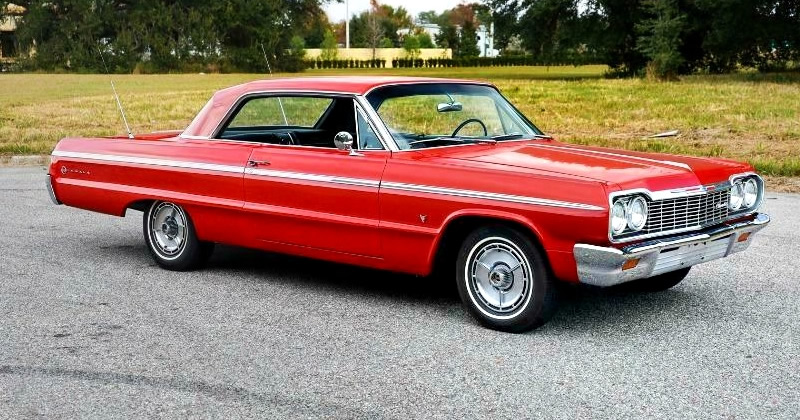 Introducing one of Chevrolet’s most glamorous cars for 1964 – the Impala SS. Here’s a rather nice one in Riverside Red that’s covered just 30,266 miles in its lifetime.

1964 was a very busy year for Chevy producing a lot of full-size cars. They produced 1.6 million Biscaynes, Bel Airs and Impalas!

The rear panel of the ’64 models was redesigned but still retained the distinctive three tail lights per side that was only found on impalas.

Other distinctive Impala features included the color-accented bodyside moldings together with impala lettering and emblem on the rear fender.

Now the Super Sport models were part of their own series, the regular Impala was now the second most expensive series in the Chevrolet line-up.

There were 185,325 Impala SS models produced. However, Chevy didn’t record the numbers per body style so there is no split between the coupe and convertible. A best guess would be around 90% of this figure were Sport Coupes.

The 1964 Impala SS Sport Coupe would have cost $2,839. This came with a 230 Turbo-Thrift 6-cylinder engine and 3-speed manual transmission as standard.

If you wanted a V8 then an additional $108 would get you a 195 horsepower 283 cubic inch Turbo-Fire and $199 for the Powerglide automatic transmission that this Impala was purchased with. Other options on this car include power steering and power brakes that would have cost $86 and $43 respectively.

This ’64 Impala SS is currently for sale on eBay. (follow the link for even more photos)