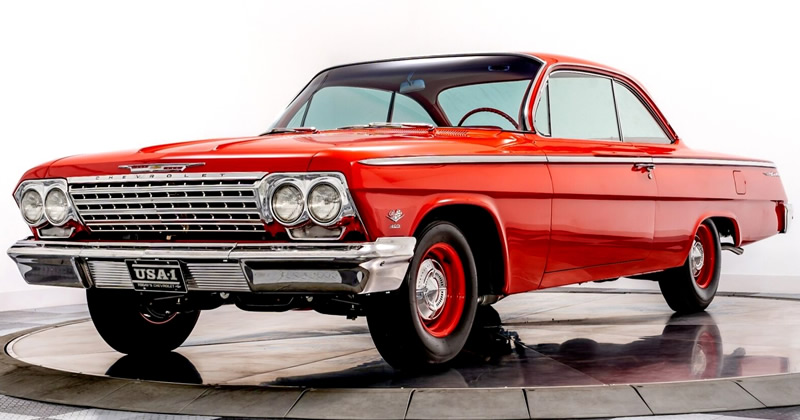 When you hear the word “Sleeper” what do you imagine? It’s probably something like this. A fairly standard looking (albeit enjoying the bright color scheme of the period), budget or mid-range car but with something rather special under the hood.

This 1962 Bel Air is arguably up there with the most collectable cars of the early sixties. Why would that be? It’s “just” a humble Bel Air (remember at this time the Impala had taken over as the top-of-the-line model?). What makes it all the more special is the 409 cubic inch V8 that powers it.

As well as introducing the Chevy II, Chevrolet revamped their full-size models from the beltline down for ’62. These Bubbletop cars (2-door sedan version) formed the basis for the Chevrolet race cars of the time.

Although the Bel Air interiors were relatively basic, they do look great and came with a few “extras” that the lower model Biscayne didn’t have.

There were actually two versions; one that output 380 horsepower and this, a dual, four-barrel carburetor, lightweight valve train and solid valve lifters – giving a total of 409 horsepower.

There is little to give away exactly what makes this car special apart from the “409” badge on the front fender. It’s a really fun car that will surprise most people at the lights.

However, if you wanted the higher powered 409 V8 with a 4-speed manual like this car, you needed to pay a further $672. That’s over 25 percent extra on the price of the car.

Chevrolet only recorded the production numbers by body style at this time so it is difficult to get an exact number. However, we do know that they sold 323,427 2-door hardtops but this would have also included the Impala.

It was a great year for Chevy with sales up over 38% from the previous year and well over two million cars sold.

This ’62 Bel Air 409 is currently for sale on eBay. (follow the link for even more photos)