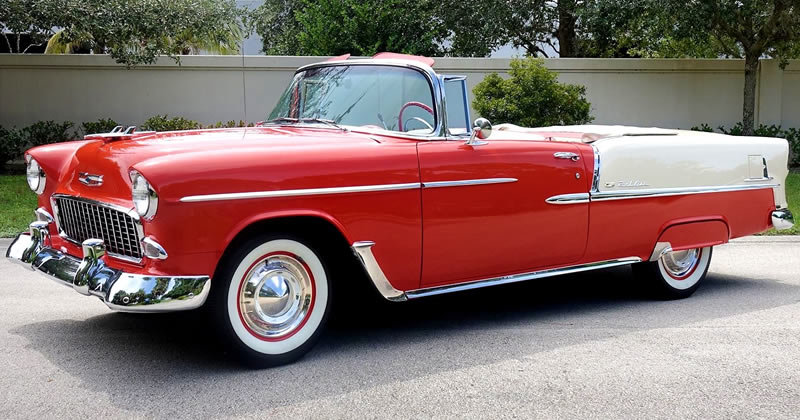 1955 was a big year in automobile history. Most of the major manufacturers had an all-new lineup of cars available. Ford had given their cars a much more exciting look, Chrysler had introduced their “Forward Look” and Chevrolet announced the “Hot One”

Arguably among the most iconic cars of the fifties, Chevrolet had achieved a look that had transformed their image from somewhat conservative to young and vibrant literally overnight. This new look sat on a brand-new chassis and, importantly, there was now a V8 on offer.

This Shoreline Beige over Gypsy Red (code 615) Bel Air Convertible is equipped with a 265 V8 and was purchased with a PowerGlide automatic transmission.

Note the V8 emblems located below the taillights that identify the V8 equipped cars.

The ’55 Chevy was available in 14 solid colors and 23 two-tone combinations. There were three different series / trim levels carried over from the previous year; the lowest priced “One-Fifty”, the intermediate “Two-Ten” and the top-of-the-line “Bel Air”.

Inside, this Bel Air is a two-tone red and beige all-vinyl interior. All convertibles were fitted with a power top as standard. This particular also car benefits from power brakes and power steering – options that cost $38 and $92 respectively.

Under the hood sits a 265 cubic inch V8 – Chevrolet had finally offered a V8 as an option in their passenger cars for 1955.

A Bel Air convertible would have cost you $2,206 for one powered by the Blue Flame 6 engine with three-on-the-tree manual transmission. An extra $99 got you the new, 265 V8 engine ($134 for the Power Pack version you see on this car). A Powerglide automatic transmission, as fitted to this car, was a further $178 if you wanted it.

This ’55 Chevy Convertible is currently for sale on eBay. (follow the link for even more photos)