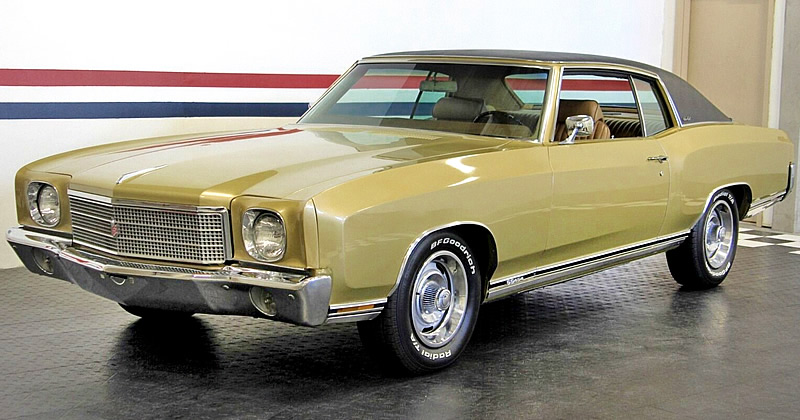 Chevrolet entered the sporty, personal luxury car market in 1970 with the launch of the Monte Carlo. Only available as a coupe body style it had a long hood and short deck – a popular look of the era.

At the front of the car are two, single headlights with a mesh-style cross hatch grille with chrome moldings to divide it into 3 horizontal tiers.

Although a bigger car overall the rear of the Monte Carlo shared the same deck as the Chevelle but sported vertical taillights to differentiate the two.

The SS package offered a more powerful 454 V8 (see below), SS identification badges, heavy-duty suspension and wider tires. It was only available on the 1970 and 1971 model years. Externally the only real identification badges were on the bodysill moldings on the front fender.

The instrument panel is the same as the one used in the 1970 Chevelle SS but with burled walnut accents.

Under the hood of the SS is a 454 cubic inch Turbo-Jet V8 engine that outputs 360 horsepower. It was only available with a Turbo Hydra-matic automatic transmission.

At $3,123 the Monte Carlo price fell well short of the Thunderbird, Ford’s personal luxury car. It came standard with a 350 cubic inch V8 and 3-speed manual transmission. The SS package you see here would have cost a further $420.25. However, as you needed the Hydra-Matic transmission that was another $222 on top.

Even with a labor strike shortly after the Monte Carlo’s introduction, Chevrolet managed to sell 145,975 of them during its first year.  Of this number just 3,823 were built with the 454 SS option.

This ’70 Monte Carlo SS 454 is currently for sale on eBay. (follow the link for even more photos)