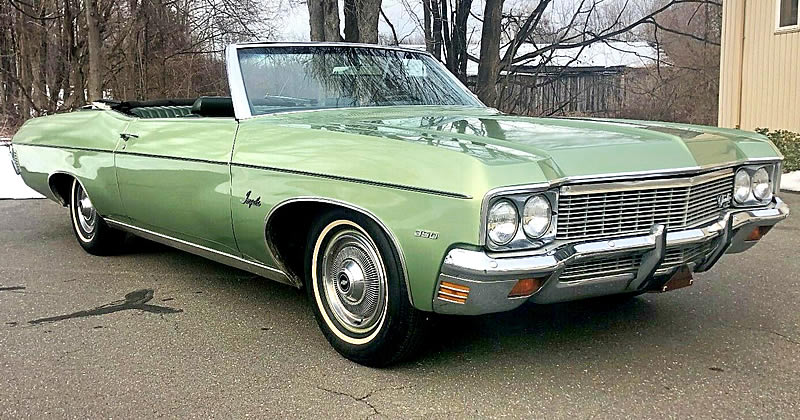 Purchased from Loehmann Chevrolet in Waterbury CT back in April 1970, this Chevy Impala Convertible has been owned by the same lady who put just 51,000 miles on it over the course of those fifty years.

The Green Mist metallic paint has seen just one respray and pretty much everything else on the car is original.

While much of the Impala remained the same as the 1969 models, the changes it did receive were to the front and rear.

At the rear, while still mounted in the bumper, the horizontal taillights of the previous year were now replaced with vertical “slot” style lights

Inside, the Impala convertible enjoys an all-vinyl interior as standard. The green color you see here was one of four colors available. Other Impala models had a cloth and vinyl combination with all-vinyl available as an option.

Underneath the hood the Impala came with a 155 horsepower 250 cubic inch, inline six cylinder engine. This car was purchased with the base V8, a 350 cubic inch, 250 horsepower engine that cost an additional $112. The standard transmission was a 3-speed manual. This car was ordered with the Turbo 350 automatic transmission that was introduced for the previous model year and cost $201.

Also fitted are AM radio, power brakes and power steering, options costing $61, $64 and $105 respectively. Not only that but it also has air conditioning, a $384 option when the car was new.

This ’70 Impala Convertible is currently for sale on eBay. (follow the link for even more photos)