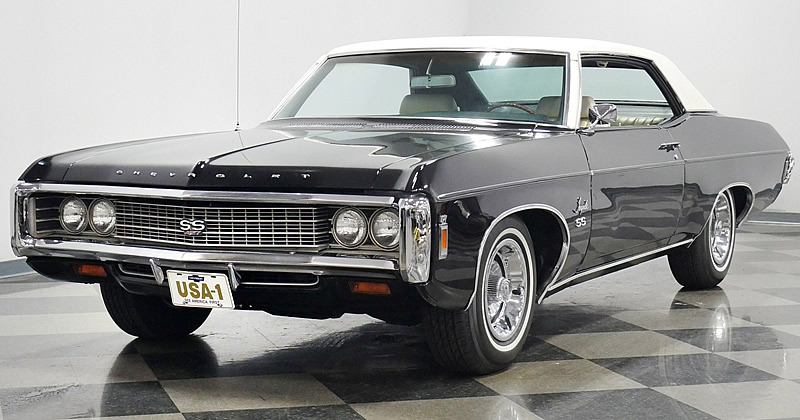 Here’s a rare beast for those who like full-size brute power – The 1969 Chevy Impala 2-door Sport Coupe with SS 427 package.

The SS package was only available on the Custom Coupe, Convertible and the Sport Coupe you see here. 1969 was to be the last time we were to see an Impala SS for 25 years.

As you’d expect on an Impala, the triple taillight arrangement was once again one of the features that distinguished it from the lesser Biscayne and Bel Air models.

Full-size Chevrolets were the only cars in the line-up to receive substantial exterior changes during the ’69 model year. The new slab-sided bodies had grown an inch while retaining the wheelbase at 119 inches. Slight flaring at the wheel housings gave them a bit more of a sporty look.

SS identification was minimal this year. The only identification in the interior was the SS badge in the center of the standard steering wheel. An all-vinyl interior with bucket seats and a center console were part of the SS package.

The exterior had SS badges in the grille, on the deck lid and on the sides of the front fenders. The only small sign that these cars had something a bit more special under the hood were the “427” badges on top of the side marker lights.

The SS427 came standard with a 3-speed manual transmission but this car was ordered with a Turbo Hydra-matic automatic transmission – a $290 option.

The disc brake option was a requirement on any full-size Chevrolet with the SS427 package.

All SS Impalas were fitted with a 427 and only 2,455 cars were made for the 1969 model year. Due to the fact that this particular Impala is also quite well optioned, it is quite a rare car. Production numbers were relatively low because, at the time, interest was shifting to the smaller, more sporty models such as the Chevelle.

Other options on this car include factory air conditioning, AM/FM radio and power steering which would have cost $384, $134 and $105 respectively when the car was ordered new.

This ’69 Impala SS427 is currently for sale on eBay. (follow the link for even more photos)