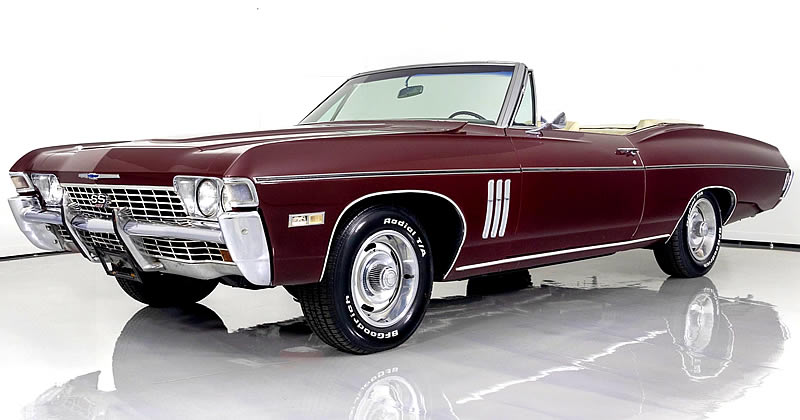 This is a 1968 Chevrolet Impala SS convertible with a desirable and powerful 427 under the hood. It was the year that saw a change to the SS, rather than a separate series, in ’68 the SS was once again returned to an optional equipment package and certainly wasn’t quite as distinctive as it had been in previous years.

1968 was also the year that full-sized Chevys received a facelift with new sheet metal and bumpers together with hidden windshield wipers. It was also the year the Sport Coupe, with its pronounced sloping roofline, was joined by another 2-door, the Custom Coupe which had a formal (notchback) roofline taken from the Caprice.

Continuing with the tradition, Impala still had triple taillights on each side rather than a dual configuration found in the Biscayne and Bel Air.

Primary competition for the Impala would have been from cars like Dodge’s Polara, the Plymouth Fury and Ford’s Custom, Galaxie and LTD.

This Impala is also equipped with the rare, Comfortron air conditioning that would have cost an additional $384 when ordered new. Other options include power windows, power steering, power brakes, AM/FM radio and a padded dash.

Chevrolet made 710,900 Impalas for the 1968 model year and it was actually their best selling full-size car for this year.  The convertible had a base price of $3,197 for the base six cylinder and a further $105 for the V8.

The SS-427 package (RPO Z24) came in at an extra $358.10 resulting in Chevrolet selling 1,778 coupes and convertibles equipped with it. It is likely that around 10 percent of this number were convertibles making this a pretty rare car. Considering all the options listed above it would be a highly desirable addition to anyone’s garage.

This ’68 Impala SS-427 is currently for sale on eBay. (follow the link for even more photos)