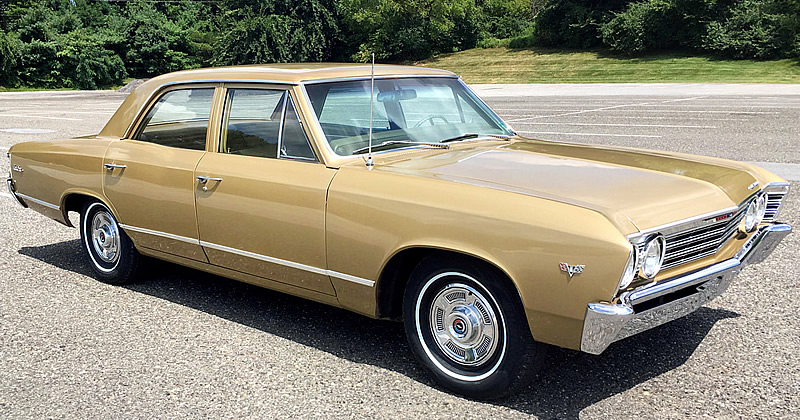 From 1964 through to 1972, Malibu was a sub-series / trim-level on the Chevelle line-up offering higher level appointments. In 1978 it became a model line in its own right.

This 1967 Chevy Chevelle Malibu sedan is a very nice low-mileage example of these well-appointed Chevelles. Apart from the obvious Malibu badges, the main visual distinction of a Malibu was the brightwork on the lower bodyside.

Malibu Sedans offered practicality for a family but with with the crisp look of a sports model. And still a relatively lively car if fitted with a more peppy V8 engine.

Some might argue that it’s not as desirable as it is a four-door and not a coupe. The reality is you can have just as much fun in sedan and it’s not every day that you come across something such a nice, low-mileage example.

Inside the Fawn interior is immaculate and compliments the Grenada Gold exterior perfectly. Even the padded instrument panel is color-keyed.

Checking under the hood we find a 283 cubic inch V8 (195 horsepower) – a $94 option for the Chevelle. This is paired with a Powerglide automatic transmission bring the total drivetrain cost to $289. The 230 cubic inch Turbo-Thrift, six-cylinder engine with a 3 speed manual transmission was standard with the Chevelle.

Other options on this Chevelle Malibu include power steering costing the original owner an additional $84 and a push-button AM radio at $57.

A 1967 model year Malibu sedan would have cost you $2,400 back then. Sales figures for individual models are a bit vague but we do know that approximately 227,800 Malibu cars were made that year.