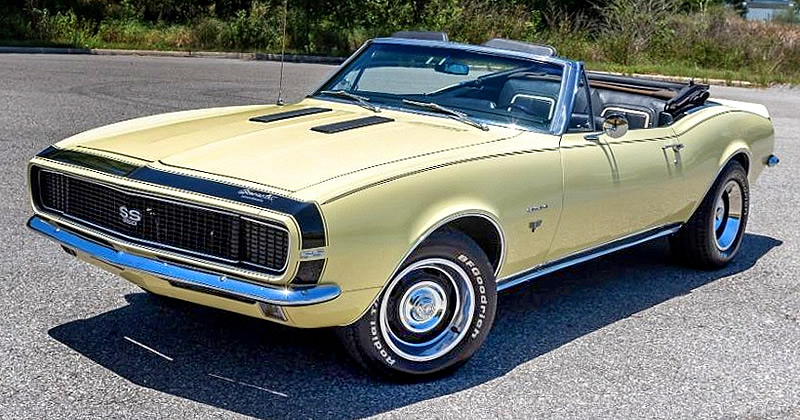 Camaro was new for 1967 and was Chevrolet’s entry into the pony car wars. What they developed was a car that could be an affordable six-cylinder sporty looking ‘pretender’ or a serious high-performance package of excitement. What we have here is the latter equipped with both the SS and RS packages.

The real fun started when you opted for the V8. A 327 Turbo-Fire was the standard V8 and would provide 210 horsepower. Upgrading to the SS package would get you the 295 hp Turbo-Fire 350 V8.  You’d also get the ‘SS’ emblem on the fenders, ‘SS 350’ on the grille and gas cap, striped hood with non-functional scoops and bright body moldings on the sills.

Just like Ford did with the Mustang, Chevrolet encouraged you to personalize your Camaro with a multitude of options and configurations.

In addition to the SS package this Camaro was also optioned with the RS package effectively making it an RS/SS. While the name “Rally Sport” might lead you to believe it was a performance package, it is actually just a trim option. It gave you concealed headlights, parking lights mounted on the front valence, rocker molding trim and various emblems around the car. It is important to note however, that when the car had both the SS and RS packages the SS emblems would be used.

This car has an engine built by Boyd Racing Engines with only 2,000 miles on it since the rebuild.

Check out the interior. You’ll see the vinyl bucket seats (bench seats were an option) and the optional center console.

Some available Camaro Options for 1967

This ’67 Camaro RS/SS is currently for sale on eBay. (follow the link for even more photos)