This is a very nice restored 1966 Chevy II Nova SS in Regal Red (code RR) with red vinyl interior (that's original). What makes this car particularly special is it is equipped with the new for 1966, L79 engine option that replaced the previous L74.

The L79 is a Corvette 327 cubic inch V8 with 350 horsepower paired with a Muncie M-21 4-speed transmission. It would certainly be fair to say these were Corvette powered sleepers! Who was expecting a compact car to be such a brute?

1966 saw the introduction of a brand-new body with taller fenders that arched over the headlamps. Taillamps were now vertical with the back-up lens at the bottom. With the L79 option, the Nova SS now qualified for true muscle car status and probably offered the best value for money. 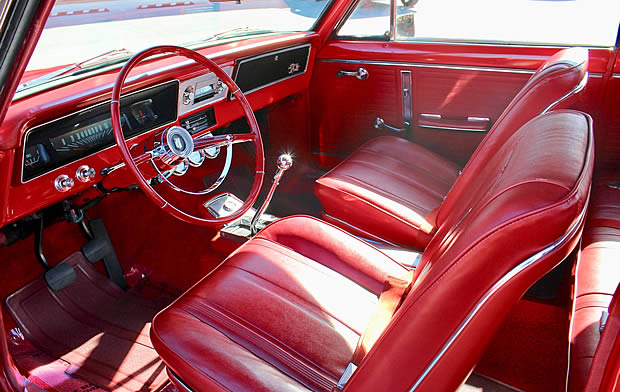 Some available Chevy II options in 1966

OPTIONS PURCHASED WITH THIS CAR

Chevrolet built 10,100 Nova SS 2-door Hardtops for the 1966 model year. The original owner of this car paid $2608.20 plus the extras mentioned above. It is thought only about 200 of these L79 optioned Novas were built, making them highly collectable.

This '66 Nova SS L79 is currently for sale on eBay. (follow the link for even more photos﻿)