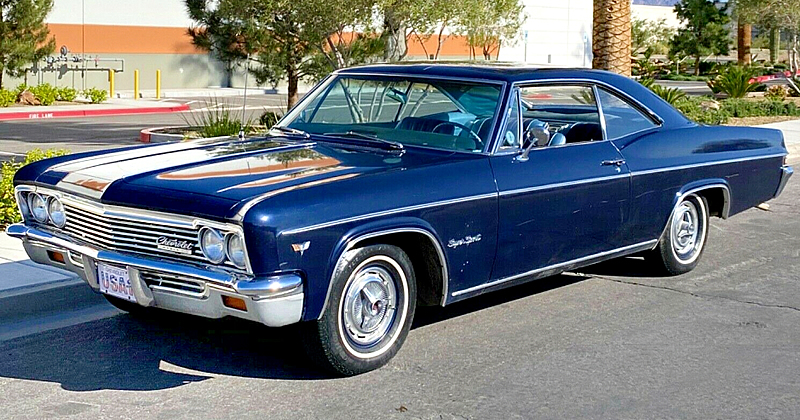 The Chevy Impala had been a hit since its introduction and 1966 was no exception, with nearly 655,000 of them being sold in that year alone.

After a major restyle in 1965 the full-size Chevys look very similar with just a few changes for 1966. These included moving the parking lamps were moved from the grille into the bumpers. At the rear the round taillights were replaced large, horizontal lenses.

This Impala Sport Coupe has sat in storage in a barn for the last 20 years and is now back on the road. Those years tucked away have helped keep the mileage down and it has just 116,000 original miles on the odometer.

With the promotion of the Chevrolet Caprice to its own series this year the Impala was no longer top of the line. However, it was still a Deluxe Chevrolet and still sat above the Biscayne and Bel Air.

Foam cushioned seating, armrests with fingertip door releases built in. Electric clock with sweep second hand and parking brake warning light were all features that Chevrolet were proud to announce for ’66.

Under the hood sits a 283 cubic inch Turbo-Fire V8 engine with 195 horsepower output. This came with a 3-speed manual transmission as standard. However, the original owner of this Danube Blue Impala opted for a 4-speed which would have cost another $184 and makes this a much rarer car.

If you wanted a Chevy Impala Sport Coupe (2-door hardtop) back in 1966 it would have cost you $2,684 for the base six cylinder. An SS Coupe was $3,000 giving you the bucket seats, center console and various internal and external SS trim.

This Impala SS is currently for sale on eBay. (follow the link for even more photos).

Production figures for individual Impala models are a little vague but we do know that a total of 119,300 Impala Super Sport cars were made. This includes both the coupe and convertible.