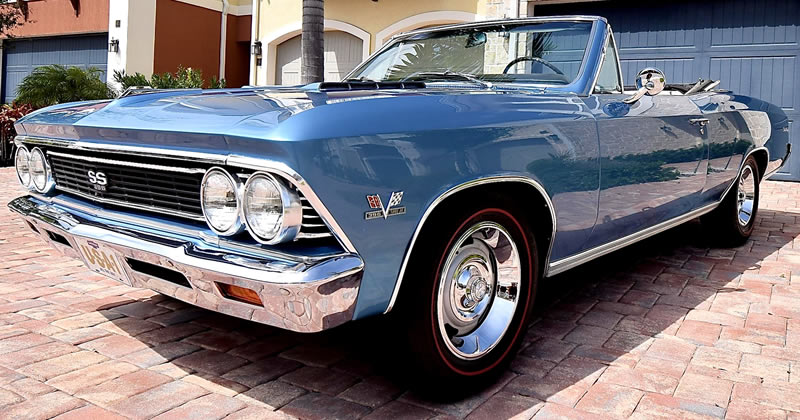 The Chevelle received a restyle for the 1966 model year with them now much more closely resembling a scaled-down version of the full size Chevy. The sport coupes in particular closely the resembled the Impala with their fastback roofline .

Take a look at this spectacular restoration of a True 138 VIN car – the first 3 digits that signify the SS396 which was available as a 2-door hardtop and the Alpine Blue convertible you see here.

Although the 396 was launched towards the end of the 1965 model year as an engine option. However, only about 201 of them were sold due to its late launch. 1966 saw it launch as the basis for the SS models. The Chevelle SS396 was born!

Super Sport identification included a script on the rear quarter panels, SS396 emblem on the blackened grille and also on the rear deck. Also featured was a twin power blister hood that made it stand out further from standard Chevelles.

Inside, the SS396 enjoyed bucket seats, center console and special instrumentation as standard. Having been an option during 1964 and 1965, the padded dash was now standard.

Under the hood, as you’d expect, there is a 396 cubic inch V8 that outputs 325 horsepower. It’s paired with a M21 4-speed manual transmission – a $210 option when the car was ordered new.

You can see on the left of this immaculate engine is the air compressor that forms part of the air conditioning. As a factory fitted option (original cost $413) it adds to the desirability of this amazing car.

This ’66 Chevelle SS396 is currently for sale on eBay. (follow the link for even more photos)