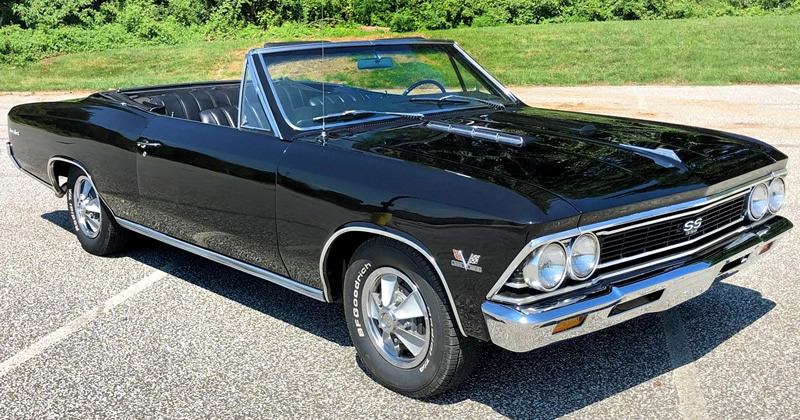 This makes this frame-off restored, matching numbers, 4-speed, triple black beauty a very desirable car. Besides, who can resist those classic lines?

In addition to the “396” fender badges, the twin power blister hood was a sure sign of what powers this beautiful Chevelle.

Despite being made just a fraction on an inch larger for the 1966 restyle, the Chevelle now looked much larger than the previous year.

Inside, this SS enjoys a black all-vinyl interior – one of 9 different colors available that year. The padded dash, an option during 1964 and 1965 became standard in 1966. Other items such as the bucket seats and center console remained options in order to keep the price down and therefore give more people the opportunity to own one.

Here’s the mighty 325 horsepower, 396 cubic inch V8 that powers this Chevelle. It’s paired with a 4-speed manual transmission costing an additional $105 over the standard 3-speed.

The Convertible SS396 was the most expensive Chevelle available during the 1966 model year with its price starting at $2,984.

This ’66 Chevy Chevelle SS 396 Convertible is currently for sale on eBay. (follow the link for even more photos)