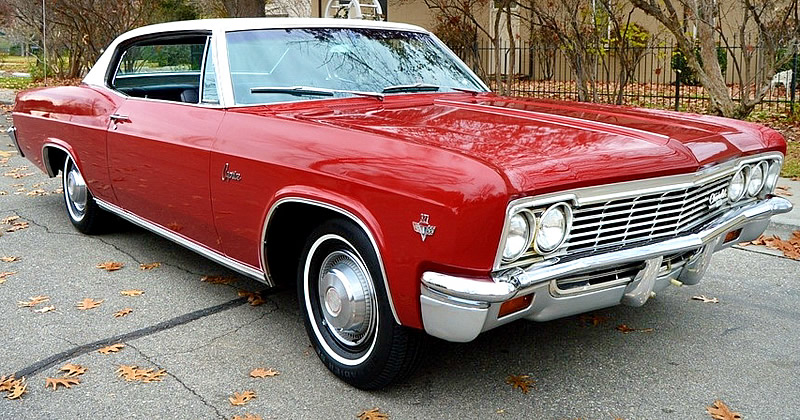 It was 1966 and the big news for Chevrolet was the new Caprice that was now a series in its own right, having started the previous year as a Custom Sedan option on the Impala. It was Chevy’s regal series offering the most luxurious car they had on offer. An even more fancy Impala if you like.

This wonderful 1966 Caprice fitted with a 327 V8 has been in the same family since it was bought brand new from a dealer in Washington on July 27, 1966!

The Regal Red paint (code R) is complemented by the vinyl top that was an option at the time.

Inside there is the beautiful black deluxe interior (code 818) – a black patterned cloth and vinyl combination. Note also the walnut wood inlays on the instrument and door panels.  Everything you see is original – that includes the carpet and the padded dash pad that hasn’t suffered any cracking. The Strato-back front seat with folding armrest was an option available on the custom sedan and coupe.

It’s just like it was when it was made in the Los Angeles, CA assembly plant all those years ago.

Under the hood there is a 327 cubic inch Turbo-Jet V8 rated at 275 horsepower. This is paired with a Powerglide automatic transmission. Both of these are factory options, original to the car and numbers matching.

Chevrolet sold a healthy 181,000 Caprices that first year and that figure doesn’t include the station wagons. A two door hardtop like this one would have cost you $3,000 fitted with the 283 cubic inch V8 engine and would have come with a 3-speed manual transmission. To get the engine / transmission combination on this car would have cost an additional $288.