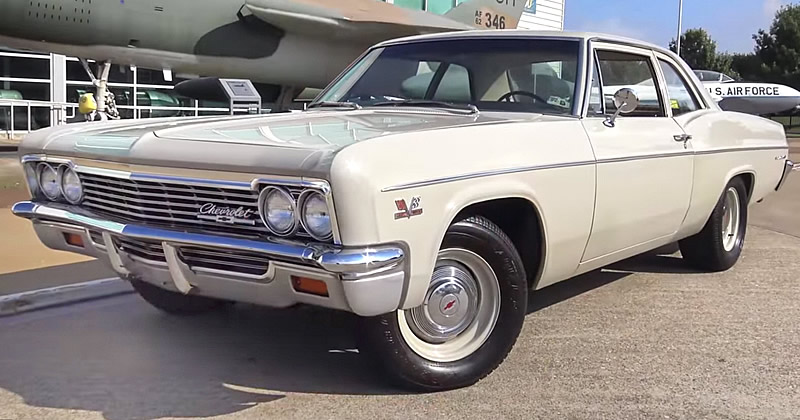 Powered by a 427 cubic inch big block V8 with 425 HP this is a very powerful 1966 Chevrolet Bel Air 2-Door Sedan. She’s painted in Cameo Beige with an all vinyl fawn interior.

There were two versions of the 427 Turbo-Jet engine, one with an output 390 HP and the one on this car that manages 425 HP. It’s equipped with a larger four-barrel carburetor, a special camshaft and mechanical valve lifters, dual exhaust and a special air cleaner. It also has special components like high-strength pistons, temperature-controlled fan, extra-durable crankshaft, double-belt water pump and fan drive.

The Bel Air was a step up from the base model Biscayne with its distinctive full-length bodyside molding. Additionally Bel Air and Chevrolet emblems on the rear fenders and a few extra features such as a glove box lamp and front door courtesy light switches.

How to Rebuild the Big-Block Chevrolet by Tony E. Huntimer

The Mark IV Chevrolet big-block, made from 1965 to 1976, produced legendary performance and is one of the greatest big-blocks of all time. With exceptional clarity and insightful detail, this book explains engine removal, disassembly, parts inspection, selection of machine work, initial and final assembly, tuning, and break-in